One of the most wanted Al-Shabaab operatives linked to the DusitD2 complex attack that claimed several lives was on the night of Sunday, September 29, arrested. Reports indicated that Fawaz Ahmed Hamdun was busted in his house in Majengo, Mombasa, by a multi-agency team. He was accused of facilitating the DusitD2 attack at 14 Riverside […] Most wanted Al-Shabaab militant has been killed by Kenya Defense Forces for his role in organising and executing attacks in and out of Somalia has been reportedly killed. Somali National Army owned radio on Sunday claimed that Mohamed Dhubow, who is believed to be the coordinator of Al-Shabaab in Jubbaland and Southeast region was killed. […] Three suspected terrorists were on Monday killed and two police officers left seriously injured after an improvised explosive went off at Kiunga in Lamu county. The improvised explosives are reported to have been targeting a border patrol unit. According to Citizen Digital, the Border Control Unit (BSP) confronted the terrorists hence preventing a planned attack. […]

A police officer has been killed on an ongoing fire exchange between Kenya police and Somali militants Al shabaab. The fight is ongoing in Dawaduba location.

Suspected Al Shabaab militants who abducted two Cuban doctors in Mandera are now demanding Ksh.150 million in ransom. The ransom demand was communicated through community elders who went to a remote place between the towns of Buale and El-Ade in Jubaland region of Somalia, where general practitioner Herera Corea and surgeon Landy Rodriguez are said […]

Two Cuban doctors have reportedly been abducted in Mandera town. There are fears that Al-Shabaab insurgents may be behind the abduction that saw one of their bodyguards killed. Witnesses claim that the militants crossed over to Somalia with their captives. The abducted doctors are among 100 Cuban specialists who arrived in the country in June […] 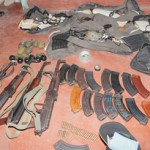 An official of the Al-shabaab militant group has revealed that over 200 members are ready to be suicide bombers everyday. In a video seen by Kenya today, an identified official who spoke on anonymity exposed that their members are always ready to retaliate upon orders from the commanders. The video posted by KTN NEWS Investigations […]

The U.S. Africa Command says the airstrike was carried out on Wednesday near an extremist camp near Shebeeley in the central Hiran region north of the capital, Mogadishu leaving 24 militants dead. The U.S. carried out nearly 50 such airstrikes last year in Somalia against the al-Qaeda-linked al-Shabab. The extremist group claimed responsibility for the […]

DusitD2 Terror suspect Violet Wanjiru aka Violet Kemunto Omwoyo(shabaab bride) has been arrested in Makueni. Kemunto was the wife to the slain terrorist Ali salim Gichunge who led the Dusit hotel attack in Nairobi. She is expected to appear in court today. She had been on the run after her husband who died in the […]

Two Cuban doctors working in Mandera County have been forced to work on their own after their counterparts fled the area for fear of terror attacks. The two; Dr. Herera Correa, a general practitioner and Dr. Landy Rodriguez, a surgeon; are however determined to stay put. Dr. Correa sees 20 patients per day during his […]