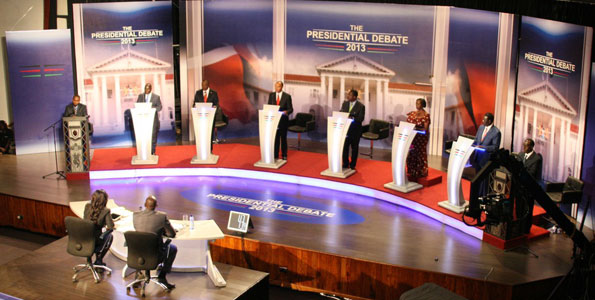 The tyranny of numbers continue with Consumer Insight being the latest “kiosk” pollster accused of cooking up figures and parroting them to media houses as credible polls. The Irony of it all is the fact that Consumer Insight is a lobby that is registered to protect public interest.
The Consumer lobby is accused of circulating a flawed poll that places Uhuru Kenyatta as the winner of the first presidential debate. The lobby is accused of outright bias considering one of the indicators alleged Mr Kenyatta to be strongest at was not debated.

“Food Security was not a key discussion point on Monday’s debate: Social Welfare, Security and Ethnicity were the issues, Mr Kenyatta did not demonstrate the necessary masterly in any of the thematic areas, in fact, ranking him even 3rd is controversial enough but to rank him first is a joke taken too far” said a Nairobi based social researcher Dr.Sastri Marambii.
Going by social media, one could tell that Martha Karua and Raila Odinga were the horses while Mwalimu Dida was a comic relief in the entire debate. Muite was obviously shouting at himself after a long day in court and ofcourse to no one’s surprise, Mudavadi was completely withdrawn.

In the Consumer Insight poll, Mr. Odinga did better than the other candidates in; Devolution, Public service reform, Energy, National security, Foreign policy, Infrastructure, Implementation of the Constitution while Ms. Karua was seen as the best candidate to deal with; Corruption, Health care, Social protection, Water. Environment
Mr. Kenneth was perceived as the candidate best able to bring: Economic growth, Fight against tribalism and Manage resources and Mr. Kenyatta was rated strongest on Food security and Job creation.

The ranking of candidates seem to be where â€œcookingâ€ of figures happened; when reached for comment to explain why he ranked Mr Kenyatta top yet he only excelled in two out of the eighteen discussion points as compared to Odinga who excelled in seven categories, Â Ndirangu offered no explanation.

In another poll released yesterday by a public affairs firm in Nairobi – Policy Options Kenya; Raila Odinga emerged the winner followed closely by Martha Karua. Uhuru Kenyatta and Peter Kenneth tied the third position followed by Prof. Kiyapi and Mwalimu Dida. Mudavadi led from the bottom.
It is clear that the Jubilee team is perfecting it’s dirty tricks like they are known to lately. We have seen some of their propagandists advance trash on social media with this regard.

Three weeks ago a well known Jubilee strategist is said to have paraded a suspect poll research firm that tabled poll results with Uhuru Kenyatta at a double digit lead ahead of his closest challenger Raila Odinga of the CORD coalition.
â€œThe sample size was indeed limiting and is said to have been drawn from an Mpesa agent in Gatunduâ€, Nicholas Kinyua a Nairobi based media critic added.