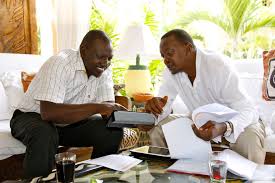 Failure by UHURUTO government to name the cabinet just shows how ill-prepared these people are to run this two-region government.

In the rift Valley, many believe a good number of kalenjins will get in to ‘equalize’ the political crowbar. The other partner is seen to have got so much recently.

Ruto, who created a siege mentality among the kalenjins is in the corner: Kalenjins want to be appeased yet so few carrots to dangle exists.

The unforgotten truth about the grand coalition government is that Raila ‘appeased’ the Kalenjins with ministerial appointments more than any other ethnic blog. In fact, the luo, Raila’s tribe, got what PNU stalwarts used to derogatively refer to as ‘departments’ with no power.

Granted, a few ‘powerful’ ministries has been given to Ruto. However, it was curious to notice that principle secretaries shall be Uhuru appointees.

In parliament, he nurtured many others; including Laborso, Kapondi, Kones, Isaac Rutto et al who were nominated by ODM to different committees. As at now, a look into the names Jubilee given for the committees already constituted pale in comparison with what Raila gave to Kalenjins.

While Odinga may be out; one streak remains to be seen: He nurtured and rewarded politicians in the Rift-Valley at very painful personal costs.

Can Ruto replicate the same? How far will he go to appease the every angry Kalenjins, lest 2018 become another civil strife.