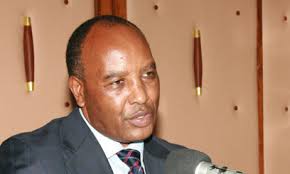 By Nzau Musau for the Star

How TJRC Land Chapter Was Censored

A senior official at the Office of the President asked the Truth, Justice and Reconciliation Commission to ‘sanitise’ the report’s chapter on historical land injustices so that the report could be accepted by President Uhuru Kenyatta.

Three international commissioners- retired Ethiopian diplomat Berhanu Dinka, US law professor Ron Slye and Zambian High Court judge Gertrude Chawatama have revealed that the Office of the President forced the commission to submit an advance copy of the final report to it and Attorney General Githu Muigai.

The three foreigners who were members of the commission said they were Â â€œshockedâ€ and â€œsaddenedâ€ by the turn of events and eventually led them to submit their dissenting opinion on the commission’s findings on land.

In their dissenting opinion on the land chapter, the three said the OP instigated the watering down of paragraphs 203, 227, 231, 257 and 261 of the land chapter. Â (See the original text of the findings on Page 24).

â€œA number of commissioners, including at least one of the international commissioners, received phone calls from a senior official in the OP suggesting various changes to the Land chapter. These suggestions included the removal of specific paragraphs,â€ Dinka, Chawatama and Slye said in a statement yesterday.

The changes suggested were eventually effected despite protests from the three who were seconded to the TJRC by the Kofi Annan-chaired Panel of Eminent African Personalities.

Paragraph 203 was doctored to remove reference to the late President Mzee Jomo Kenyatta dishing out a â€œlarge tract of government landâ€ as a wedding gift to his son Muigai.

Paragraph 231 was retained in the original but a rider was added to the effect that the commission could not independently verify the allegations from independent sources.

The rider appeared designed to work in the interest of former President Kibaki who is accused in the original paragraph of disrupting the efforts of the Greek landowner Basic Criticos’s family of resettling the landless in their expansive Taita Taveta farm.

Others implicated in the paragraph is an unnamed â€œlocal MPâ€, the Ministry of Lands and Â Settlement and the provincial administration which â€œforcibly evicted the Criticos familyâ€ and began to dish out their land.

Paragraph 257 was also extensively doctored. The paragraph retained in the doctored report has only 23 words while the original had 175. The doctored one says that in 1972, a â€œprivate individual unlawfully alienated 250 acres of land to himself.â€

The original chapter had however specifically named the individual as President Mzee Kenyatta who alienated to himself 250 acres of land, most of it beach frontage. It also contained an account of how the founding president took Tiwi and Diani trust lands allegedly after evicting and threatening the locals.

â€œIt is unfortunate in our view that the political pressure that was brought to bear ostensibly to protect the reputation of the first President, will probably have the opposite effect of tarnishing that legacy,â€ the statement by the three commissioners says.

The original paragraph 261 specifically mentioned that settlement schemes in Coast province only benefited one tribe- the Kikuyu. However, the chapter in the report handed in to President Uhuru Kenyatta late last month was amended to remove the reference to the Kikuyu and replace itÂ with â€œupcountry communities.â€

Paragraph 227 in the same ‘doctored’ report omits a caution deduced from testimony received in Lamu in which residents claimed they were better off under colonial rule than under successive independent Kenya government.

The section excised from the report warned that failure to address such concerns may cause MRC-like secession groups to spring up especially in this devolution era.

Dinka, Sly and Chawatama said the changes were made without any consultation, meeting or following the agreed procedure. They said that the commission chairman Bethuel Kiplagat simply wrote a letter to the commissionâ€™s director of research authorizing the changes and claiming five commissioners were supportive of it.

According to an early 2012 agreement between the commissioners and Kiplagat which was included in the final report, Kiplagat was to keep off in the drafting of the chapter on land owing to a conflict of interest which arose after he was accused of personally benefitting from illegally acquired land.

The three commissioners accused their Kenyan colleagues of frustrating the publication of their dissenting opinion in the final report which was presented to President Uhuru.

They said the printer was was instructed to omit their dissenting opinion by a senior commission official despite an April 16 agreement that dissenting opinions would be published and submitted at the same time as the final report.

The explanation given at the time was that a majority of commissioners had voted to exclude the dissenting opinion from the final report. The three commissioners say this was contrary to the procedures agreed to by the whole commission.

â€œA dissent by its very nature does not require the consent of the majority; otherwise it would not be a dissent.Â We later received indications that one, and perhaps more, commissioners who were claimed to be a part of that majority had in fact not been consulted, much less expressed their consent, to this course of action,Â â€ they said.

The three said they have no information whether President Uhuru condoned the altering of the report by the OP. They said they decided to make public their dissenting opinion in the interest of transparency and truth.

“The report handed over to the President is incomplete, however, because it does not include our dissent,” they said adding they did not endorse any of these changes or any others that might come to light and therefore be subject of legal challenge.