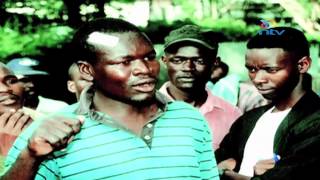 Save for very close friends and colleagues in students activism during Kenya’s political transition stage of 1990s, most Kenyans may never understand the late Karl Marx Christopher Owiro. Few understood his ideological inclination and tendencies. The basis of his enigmatic mien may forever remain a puzzle to majority of Kenyans.

A number of people fail to look at Karl Marx’s life in totality and only focus on his downward trend in the later years, a trend that was a natural consequence of his heroic struggles against a despotic and centralized system that informed the relationship between institutions of higher learning and the state.

Karl Marx’s story is a sad story of how the patronizing Moi Government, directly and/ or through it’s agents posted in Universities as Vice Chancellors and senate/ council members suspended, expelled, failed, maimed, jailed, and even killed intelligent, courageous, ideologically driven and visionary students leaders. Karl Marx may have escaped being killed on campus as happened to Solomon Muruli and others, but the torture and the frustrations through suspensions, expulsions, arrests and physical assault meted against him slowly took a toll on him and drove him into isolation and alcoholism, and finally to his death.

Despite finally leaving University with a good degree and a Post Graduate Diploma in Actuarial Science, Karl Marx could not find a job in Government, private sector and even the civil society. He once narrated to me how he got sacked from CDC- Kisumu within two weeks of recruitment when his boss noticed how influential he was on other employees and on enquiry learnt that he was the “Karl Marx”. His political mentor James Orengo, a man Marx believed in and sacrificed a lot for to mobilize students to support Muungano wa Mageuzi, abandoned him. He finally retreated to Otonglo and spent his time amongst illiterate villagers who could neither understand nor engage him in intellectual discourse. He was angry and hungry. Marx slipped even more deeply into alcoholism.

Those of us who knew Karl Marx well enough have a duty to tell his story. Like the European contemporaries of his name sake in the 18th Century, we need to document and dialogue about the life, tendencies, ideologies, achievements, miscalculations, failures and mistakes.

Jacqueline Klopp and Justin Orina have made a good attempt, in www.columbia.edu/~jk2002/publications/KloppOrina02.pdf, in explaining tge challenges that Karl Marx and his peers in student activism in the 1990s faced in dealing with the crisis in Kenyan universities within the context of a centralized and oppressive state whose tentacles were active within universities in form of Vice Chancellors, Senate and Council members. Let us continue the discourse.