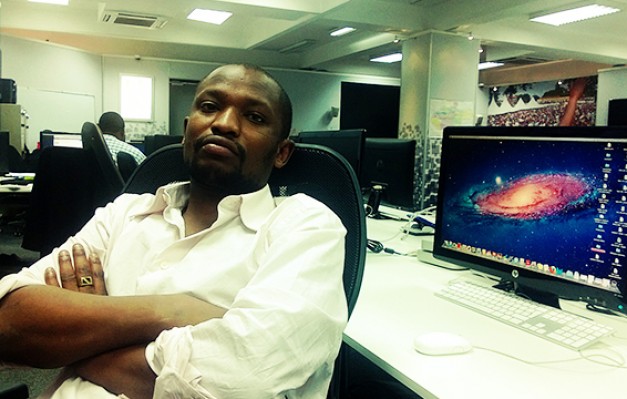 I met him at a restaurant that had an atypical toilet; one that that required a client to squat.

It could not flush and the sanitary disposal bin was an open bucket that proudly displayed its contents like a badge of honour. When I walked into the toilet, I met a man, a cleaner, looking for a broom. He had a cold stare and was wearing doll shoes â€“ the ones Nairobi middle-class women wear in the office when their killer heels are too painful to walk around in. The man in the toilet did not say hello, I did not care.

I was meeting Bogonko for a lunch date that we had talked about for many months. I had suggested Savannah on Loita Street but he convinced me that Simmers had the best Ugali in town, I agreed. I promised him a Guinness. He smiled.

Now on a cold August we were having lunch â€“ in a restaurant that had an atypical toilet. He ordered Ugali and I, a gin and tonic. He was startled by my choice. Maybe he thought I would order tea? Soda? Coffee? I donâ€™t know. He muffled something under his breath and ordered a Guinness.

Seated across me is Dickson Bogonko Bosire. A man I consider a crazy genius – the son of a teacher. A man who says he has no reputation to protect or build. A certified gossip peddler â€“ the brains behind Jackal News.

I am sitting opposite a man who openly confesses his profound love for Guinness and Gossip. He is a man who sold his heart to Guinness after Mwendwa Kiogora, the woman he loved so passionately refused to love him back.

Mwendwa stole Bogonkoâ€™s heart. She stole his liver, his pancreas but not his head. He still sings her praises, he remembers all the gifts he gave her and the times they â€œshared a tentâ€ in South Sudan. He once introduced Mwendwa as his wife to an Italian Priest, Father Antonio Labraca, in Old Fangak, South Sudan. He remembers how she nursed him after he broke his hip after the 2007 post-elections violence. The embers of love for Mwendwa still burn in Bogonkoâ€™s belly. She is the woman he loved with all his heart, soulâ€¦

The food comes and Bogonko goes to wash his tobacco stained hands. His finger nails need a manicure â€“ I think to myself. I am tempted to fix the protruding collar of his jungle green shirt. But no, this is Bogonko, the man who cares nothing for a reputation. The man who only cares about what his mama thinks of him.

I watch as he eats and we catch up on Nairobiâ€™s gossip. He dives into his black bag, fishes out an August copy of Drum magazine and shoves it to my face.

I know he shoots from the hip.

â€œShe says she is Olivia Pope,â€ he retorts, referring to the character played by Kerry Washington in Scandal, the most powerful fixer and presidential mistress in the series. I smile. I donâ€™t know what to say. Maybe she is. Maybe not. I donâ€™t know.

Our chat is interrupted by a call. The caller is a woman. She wants Bogonko to respond to a tweet that claims a certain senior government official does not run his Twitter account.

The woman on the line is agitated. Itâ€™s a lie she says and she wants Bogonko to help. He disconnects the call and tells her to call him after 10 minutes. â€œWho is that I ask?â€ He reveals her identity. She handles the officials twitter account and she wants it to remain a secret. Hmmmmâ€¦..

Another call comes in after two minutes. Bogonko looks at the number and ignores the call. â€œThis guy is now looking for me after I tried calling him all morning! I wonâ€™t pick,â€ he says and continues devouring his fish.

We continue talking about Cynthiaâ€¦ another call comes in. The caller is a woman. A woman who thinks Cynthia Nyamai is a bluff and her closet has more skeletons than those snoozing in Langata Cemetery. Bogonko listens, eats his ugali as the caller goes on a rant. His face has no expression. â€œItâ€™s OK. If we want to expose Cynthia we can. But letâ€™s see,â€ he disconnects the call.

We go on chatting. I ask questions and he answers. I give him comments about the gossip I have read on Jackal News. We chat about the K24 layoffs, the intrigues at Standard Group, political gossip, Anne Kiguta getting married and about me and my work.

Bogonko is the kind of interviewee that is any journalistâ€™s nightmare â€“ he knows too much. He has read too much. He has an opinion about everything! He supports his answers with a quote from a book he read, an article he read or a conversation he had with his former boss. Word for word Bogonko will quote for you. â€œMoney is like sex. Good to have but inappropriate to talk about in publicâ€¦â€ he tells me in reference to Cynthiaâ€™s millionaire confession.

He promises to loan me several books including the autobiography of Pope John Paul II, The Hidden Pope, that he is currently reading. Bogonko likes to share knowledge he brought me a print out of an article written by Halle Berry published in Esquire. He tells me to read and see what a clever Editor does to an ordinary story. He tells me the changes I need to make to my magazine. I listen, watch and learn.

He orders for another bottle of Guinness and he tells me the story of Michael J. Karanja, the man behind Tusker Malt. â€œHave you seen the signature?â€ he asks. â€œNo! Whatâ€™s the story?â€ I ask.

Bogonko orders a waiter to bring an empty bottle of Tusker Malt and tells me about the man whose signature appears on the bottle. Karanja is the man from Banana near Kiambu who graduated as a Bio Chemist but failed to get a job in East African Breweries. He took up a job as a tea boy but in between his chores, sat in the kitchen reading books. The company CEO (a European) noticed his unusual love for books and asked him what he wanted to be. When he said he wanted a job at EABL, he made a call and got him a job. The boy was later to come up with the unique formula of Tusker Malt inspired by the death of his father who died of diabetes. Karanja later rose to become the EABL managing director. Or so the story goes ….

â€œThe problem with Africa is not poverty but we waste talent! Can you imagine if the (Mzungu) CEO did not notice the boy? People especially in Kenya do not give others a chance!â€ Bogonko tells me.

I look at my watch. It is past 4 pm. We have been chatting for over two hours. â€œI need to leave,â€ I tell Bogonko. â€œNo! Let me get another Guinness before you go. I also need to check when a friend is able to see me,â€ he says. I wait and watch him sip his beer and we continue chatting.

With nostalgia, Bogonko recalls his days in AFP when he covered the Sudan Peace Talks and his close interactions with former rebel leader John Garang. When he goes to take a puff, I Google Bogonko Bosire on my phone and I see his stories on the Mail & Guardian. It is Bogonko who broke the story of the Kiambaa church fire in Eldoret â€“ he had called a senior police officer and as they chatted, a radio call came through breaking the news. Bogonko listened and typed away â€“ breaking the news to the world.

It is Bogonko who stole an unpublished scientific research report from Mzalendo Kibunjaâ€™s office that said the presence od dinosaur bones in northwestern Kenya was a confirmation of rich deposits of hydro carbons. It is the same Bogonko who showed Anne Kiguta the ropes of journalists â€“ the woman he calls his â€œfrenemyâ€.

Bogonko is indeed a special man. A crazy genius. A man who gets an exploding orgasm from a good story.

The phone-losing man whose name on M-Pesa registration is incomplete.

He is the man Kenyans have come to hate â€“ the man behind Jackal News! The man I had lunch with at a restaurant that has an atypical toilet.

Editorâ€™s Note: Carole Kimutai is the editor of Managament Magazine. She is also a Masterâ€™s student in the University of Leicester. When not busy with her magazine, she does marketing and media review for www.bizcommunity.com, a South African website. An analysis of Cythia Nyamai’s story in the Drum magazine is will be published on the Jackal News soon.