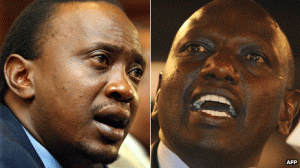 The Deputy President and presidential hopeful, H.E William Kipchirchir Samoei Ruto has been traversing his former political Luo Nyanza locale where prominent members of the community have formed a â€˜soothing tuneâ€™ albeit indifferently and nastily called, No Uhuru No Hague! He smiles behind the podium as the song unfolds.

In one of the recent instances, the Deputy President visited Migori County to help raise funds in aid of an SDA Church building and the banner was raised on his face in a manner that portrayed that his former ODM party members, particularly the Luos, regarded him. That was far from truth; just like east from west.

Headed by Rongo MP, a treasured Raila Odinga’s political ally, Dalmas Otieno, they said the cases facing the two should be dropped as the two leaders were only political sacrificial lambs. That was not the true message but it resonated well across the terrain for a long period of time. Since then, H.E Ruto has enjoyed the false company of the ODM politicians. And currently, he may be feeling like a king borne in an extraordinary comfort of implausible hands. He may be thinking that the sun is rising with healings on its wings; that â€œKenyans are wonderful people,â€ blown about by beating winds! That is just one side of the open falsehood.

H.E Ruto must be busy scaling an exit route in earnest. He must be dissatisfied with his space in the government. His robust stuff must be so big that the government of President Uhuru Kenyatta cannot accommodate appropriately! Or may be his faith is not founded on a lasting ground!

Signs for Rutoâ€™s current brand of political chess were always expected. When Hon Alfred Keter blew the first trumpet, he simply confirmed peopleâ€™s prospect, however unduly stirring the furnace. Though lacking predictable dynamism, Rutoâ€™s vigor and ambitions crazed anticipation of a clash between him and the Presidentâ€™s handlers. It was rumoured that the President would deal with him in filling of posts in the government at the time he would be busy at the ICC. It came to pass that when Keter and his lead-counsel at The Hague, Karim Khan, accused Uhuruâ€™s people of working to fix him in the cases; more were tied to frustrations in the government than the ICC.

The President replied by reminding them that their time is yet to come. He asked them to spare him the noises. â€œYou cannot ask me to lay-off anyone. Wait for your time so that you can appoint your people!â€ That was clear enough.

Cumbered with other cares, the Jubilee Coalition Train that pulls the nation through implementation of the New Constitution to the year 2017 has become too tricky to predict. Pulling through challenging economic meanders and security threats, the coalition is also bogged by tensed intensive cold wars between President Uhuru’s team and Ruto’s local henchmen and folks. Owing to the fact that the two sides fiercely fought five years ago, the puzzle is terrifying a lot.

Since the ODM is keen to cash-in on Rutoâ€™s prevailing predicaments, the partyâ€™s hawks have jammed the train and become part of the unknown Jubilee passengers who accompany the Deputy President in his rallies and missions. This makes the Jubilee train more tricky, not for Uhuru but for Ruto.

The President might opt to act carelessly and waylay Ruto without further patience. That is the time the DP will look at his sides but see no Luo or ODM hypocrite besides him. Even his majority of Kalenjin backers may only want to see Keter. It may also not leave him with a hiding place, especially, when the ICC demands to have him for their jail. The President may not be obliged to shield him. That means Rutoâ€™s Kalenjin followers will burst of rage and not only curse the Jubilee coalition which they sewed together but also fight to tear it into shreds. Though it may not have a national appeal it will definitely weaken the nation. Jubilee is the ruling coalition.

As President Uhuru frequently puts it, there is no room for Ruto near power come next general elections. If he ever nurses ambitions of contending for power, he should keep it enclosed within him for a long period of time. In other words, the President is telling his Deputy that his ambitions are not sharable with another whatsoever. That also means Kenya is not destined to have Ruto for Deputy President beyond 2017, especially, if the ICC does not consume him early.

H.E Ruto might have seen the writings and is busy scheming on how to make 2017 his year of sowing or harvesting. He might be dreaming, either anxiously or horrendously. He might be thinking, either graciously or rancorously. He is between a rock and a hard place. He must think though. In his moves he must ensure that he is better safe than sorry.

Unless something changes the obvious, President Uhuru has clutched it. If Ruto makes a romp in 2017 it will be in the opposition; in the cold of our Constitution. That also means his politics is as well as dead and buried in the grave of history however young he may be.