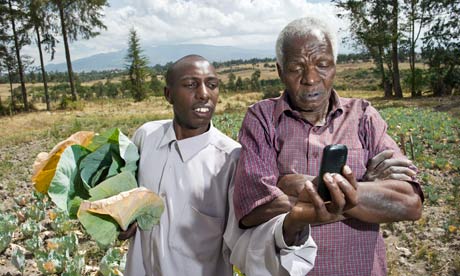 John Wahngombe (left), a farmer in Murugaru, Kinangop North, shows another local farmer how to check for the latest prices. Photograph: Sven Torfinn/M-Farm

Smallholder farmers stymied by lack of information can see realtime market prices for their produce, and now they want to sell to Tesco, too

The importance of smallholder farmers in terms of food security and economic development is increasingly being realised.

M-Farm co-founder Jamila Abass Photograph: M-Farm Most of the 1.4 billion people living on less than $1.25 a day live in rural areas and depend largely on agriculture, while an estimated 2.5 billion people work in full- or part-time smallholder agriculture, many of them in Africa. Yet these farmers labour under severe handicaps: remoteness from markets; lack of storage, seed and fertilisers; and weak bargaining power with buyers. A lack of information, particularly on prices, puts smallholders at a disadvantage.

M-Farm, a Kenyan company co-founded in 2010, seeks to redress the balance in favour of smallholder farmers by addressing what co-founder Jamila Abass calls “asymmetry of information” â€“ and make money in the process.

Abass created M-Farm with Susan Oguya and Linda Kwamnoka, inspired to act by stories about the exploitation of smallholders by middlemen offering meagre prices.

“The exploitation of farmers is not new, it has been going on for a long time. We wanted to focus on agriculture and the challenges farmers had and the possibility of bringing about change,” said Abass, who was in London this month to attend Africa Gathering, a networking event, and to talk to supermarkets about linking them to African smallholders.

Abass, 29, one of 19 children from a poor family, left her job as a systems developer at the Kenya Medical Research Institute and joined Akirachix, an IT hub that brings together women and technology. The launch of M-Farm followed a â‚¬10,000 (about Â£8,500) investment prize.

“The competition was meant for men, but the timing was right because the technology sector was emphasising gender equality and the empowerment of women. We were very lucky,” she said.

The publicity helped to garner $100,000, half in grant and half in loan, from the UK charity TechforTrade, which supports innovative approaches to poverty alleviation.

M-Farm provides price information to farmers. By sending an SMS, farmers can see market prices in real time for their products â€“ cassava, groundnuts, sorghum, passion fruit â€“ so they do not get ripped off by buyers at their farms.

The company employs 10 people in five cities â€“ Mombasa, Nairobi, Eldoret, Kisumu and Kitale â€“ who collect daily price information on 42 crops across Kenya. About 7,000 farmers use the service, for which M-Farm takes a tiny cut from the mobile phone provider.

M-Farm makes its money by playing the role of middleman itself. In that way, the company does not cut out intermediaries completely, but reduces the three or four layers that chip away at the smallholders’ cut. M-Farm employs 18 agents who link smallholders with buyers and charges a commission of 10-15% for the service. The agent’s job is to get the best price for the farmers, typically by organising them to sell collectively in groups of 20 to 120.

“If someone sells via M-Farm, they register with us details of the produce they want to sell and we charge a commission. It’s similar to eBay,” said Abass, adding that M-Farm has increased the prices its farmers have received. 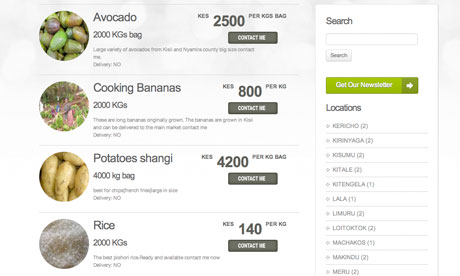 Screengrab of Kenyan M-Farm market place with vegetables and their price, 27 June 2013. Photograph: M-Farm For example, farmers selling snowpeas through M-Farm are now getting 90 Kenyan shillings (about 68p) a kilo, double what they were getting previously. About 5,000 farmers are using M-Farm as a middleman. The advantage for farmers is that they can count on a reliable buyer.

“We are having to turn down farmers who want to join our service because we can’t find enough buyers,” said Abass. “Spreading ourselves too thinly would be really risky for us.”

This is why M-Farm is seeking to forge relationships with UK supermarkets. Supermarkets have a reputation for driving down the prices of their UK suppliers, but Abass says they could help smallholder farmers in Kenya.

“Farmers in the UK have the luxury to complain about Tesco,” she said. “But in Kenya, if Tesco wanted to buy from farmers, it would double the price Kenyan farmers would receive and make a huge difference in boosting their livelihoods. We are not short of farmers, we need buyers. What is lacking is the market itself.”