In the picture Meru leaders Kiraitu Murungi, Mburi Amburi and Mithika Linturi
An innocent post by Uhuru Kenyatta’s social media cabinet lead (what most call PROPAGANDISTS) served to unravel the deep disquiet in the president’s backyard. It turns out even the die-hard Uhuru Kenyatta supporters have realized Jubilee regime is up-to nothing as cost of living rise and collapse of basic infrastructure takes centre stage.

Here below is the Facebook post by one Joseph Githu, you can follow the conversation in his Timeline (if not deleted yet), we provide a cut paste below and a screen shot: Kikuyu voters miss the era of Daniel Moi….

At this rate the Uhuru regime will be dethroned NOT by the Migori shoe throwers nor the Coast region squatters BUT Mt Kenya sufferers, they seem to be angered that much is happening elsewhere than their backyard !

By Joseph Githu:
Seems like being in the opposition is better than being in government. ….am looking at the goodies in western Kenya, coast region and now the multiple nyanza region visits while the central Kenya people like me have nothing to show for being in government. At least when A. K. MAGUGU used to support Moi all githunguri roads had tarmarc

Simon Kioi Read prodigal son’s story in the Bible and note similarity of your views. But I respect your concern.

Martha Hanee we all mourn A.K.Magugu and the legacy he left……where will another son of Githunguri rise ??

Kimani Kariuki True,was also wondering in which govt are we in?kwanza kwetu Lari,am thinking of mobilising people to air our grievance

Maina Wahu Wa GacÃ»hÃ® Longing for the day- when citizenry will be. madated to recal. – mpigs, mcas and other non performing elected leaders@ Joroge Baiya- . for the past years. infrustructure. …bad

Joseph Githu Wambui Macharia its not about exiting. …..but I have observed now that when your vote is guaranteed you are not a priority anyway

Mary Kigwa Don’t remind me the way to our toilet back in the rural is mere Tarmac courtesy of Arthur Magugu..It seems nobody will ever replace his work

Benjamin K Waigwa Am from Nyandarua County and we cant feel our being in government. 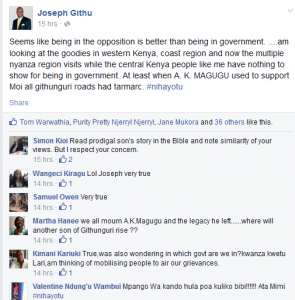 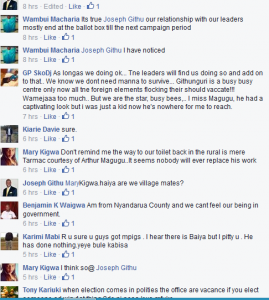