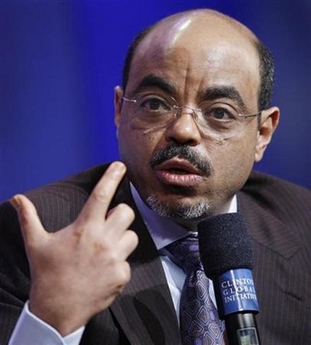 By Kenya Today and agencies

The message read in part “Prime Minister Zenawi suddenly passed away last night. Meles was recovering in a hospital overseas for the past two months but died of a sudden infection at 11:40 (on Monday night),”

The Prime Minister failed to attend an African Union summit in his countyâ€™s capital Addis Ababa fueling speculation that he was seriously ill.

After intense speculation about his health, the government said that he was taking a break to recover from unspecified condition.Â  Leading diplomats based in Addis Ababa disclosed that the PM was being treated in German or Belgium, information was not clear.

During his reign, Ethiopia rose to a security powerhouse in regional. The Ethiopian forces are highly regarded as top three strongest in the continent.

His forces have fought what many in the region could call proxy war in the horn Africa especially in the war against Al-Qaeda and now Alshabaab. He was a close ally of the West.

The countryâ€™s Deputy Prime Minister Hailemariam Desalegn appointed in 2010 is tagged to be the acting prime Â Minister, he is expected to be Â sworn in as prime minister after the an emergency meeting of parliament.

Prime Minister Meles can be credited with leading Ethiopia towards economic growth and mediation in between Sudan and South Sudan.

With the new regime set to take over, Ethiopiaâ€™s role in the region is set to diminish owing to domestic pressure – rising poverty levels and the momentum gain in economic growth. However its security will be on high alert due to the ongoing war on Islamists groups in Somalia and also the countyâ€™s nemesis Eritrea.

The Late Prime Minister is accused of high handedness especially in matters to do with freedom of media. Several opposition supporters, journalists and bloggers have been arrested under a 2009 anti-terrorism law.

The funeral arrangement was not immediately released.