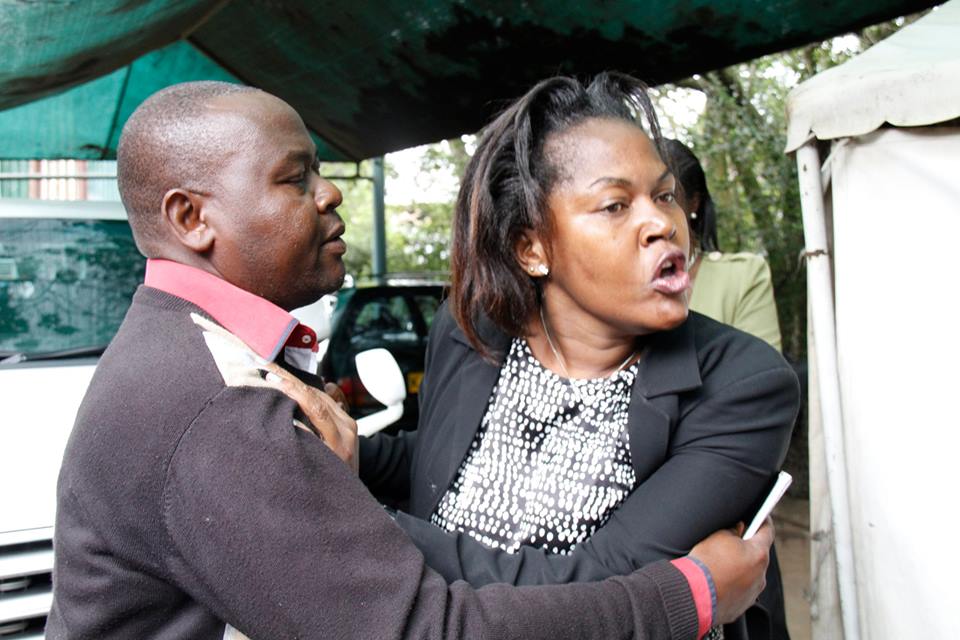 A woman claiming to the wife of the late Homa Bay senator Otieno Kajwangâ€™ has been ejected from the Lee Funeral Home by the family members.

The woman identified as Faith Vivian Kajwang’, stormed the facility saying that she too has a right to view the body of the late senator who died of what is suspected to be a heart attack on Tuesday evening at Mater Hospital.

Faith was accompanied by her daughter, 18-year-old Christine Otieno who concluded her KCSE from the Kenya High School. Faith also said she had a son with Kajwang’.

The son’s name is Rooney Odinga Otieno, a 19-year-old student at Moi Univesity Kabarak where President Uhuru Kenyatta is officiating over a graduation ceremony Friday.

Faith said she has been married to the late Kajwang’ for the last 19 years adding that he paid dowry for her and their families know each other. Kajwang’s other wife Rose who was there at the time of the incident made no comment.

Faith who said she lives in Lang’ata and who said she was first to arrive at Mater Hospital on Tuesday accused Kajwang’s first wife Rose, of barring her from taking part in the funeral preparations.

At the same time ODM youths who have been camped at the funeral home since early morning wanted to storm into the morgue saying that the results which were to be released at 10am Friday morning were being delayed with.

Family members of the late senator have however managed to calm down the rowdy youth and called for patience as the procedure is concluded.

Ruaraka MP and brother to the late senator, Tom Kajwang’ in the company his mother, Siaya senator James Orengo and the family doctor have left to an undisclosed location for a meeting after which they are set to announce the location from where the results of the postmortem will be made publi