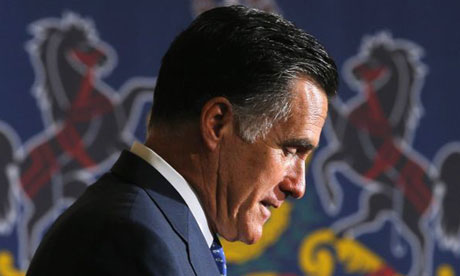 The GOP not long ago stood to take control of the Senate, but key races are slipping away as party’s top candidate stumbles

BY: Ewen MacAskill in Washington for The Guardian, Friday 28 September 2012

Mitt Romney‘s collapsing campaign is beginning to hurt Republican chances in key congressional races, risking their hopes of taking the Senate as a bastion against a second-term Barack Obama presidency.

More and more Republican congressional candidates are distancing themselves from their party’s White House ticket as they are hit by ads from their Democratic opponents linking them to Romney and his running mate, Paul Ryan.

With Romney still reeling from one bad poll after another in swing states, the Obama campaign opened up a new front on Friday, sending vice-president Joe Biden on a two-day visit to Florida to warn the elderly that a Romney-Ryan victory would mean new taxes on their social security benefits.

Creating fear among the elderly is a potent message not only in Florida, a state with a high proportion of retirees, but in other swing states. A new poll, by the Washington Post and the health group the Kaiser Foundation, by Ryan to reform Medicare, the healthcare programme for those 65 and over, has alienated potential Republican voters..

The poll found that in three battlegrounds â€“ Florida, Ohio and Virginia â€“ the changes to Medicare proposed by Ryan have tilted the elderly towards Obama. The issue ranked with them as high as the state of the economy.

Sixty-five percent of those polled in Florida want to keep Medicare as it is. In Ohio, Obama held a 19% advantage over Romney among voters asked who they trusted most with the health programme, 15% in Florida and 13% in Virginia.

Romney’s lacklustre campaign, compounded by the threat to social security and Medicare coming on top of last week’s secret video of a Romney speech, appears to be pulling down Republicans in congressional races. Candidates can usually count on receiving a boost in their districts and states from a successful presidential campaign.

Stu Rothenberg, editor of the Rothenberg Political Report, told the Washington Examiner: “Republicans still have a chance, but it’s not what it was six months ago or a year ago. And if you had to weigh the two parties’ chances, you would have to say the Democrats have a better chance of holding the Senate.”

The Republicans hold the House and had high hopes of adding the Senate too. With control of Congress, they would be able to throw up a formidable barrier to Obama implementing new domestic policies.

The Democrats hold only a four-seat majority in the Senate and had looked vulnerable. But the disarray in the Romney campaign has thrown those hopes into doubt. The Democrats are threatening to win seats the Republicans had been expected to win easily, such as Virginia. The Democratic candidate in Virginia, Tim Kaine, is up 3% on his Republican opponent, George Allen.

The one remaining opportunity for Romney to turn the presidential campaign round is the first presidential debate on Wednesday in Denver, Colorado. Tens of millions are expected to tune in for the first opportunity to see Obama and Romney one-to-one in a debate in which issues such as tax, health care and the secret video of Romney disparaging 47% of the population as freeloaders are all likely to figure.

Debates usually end in draws that are quickly forgotten, as in 2008, but they can make a difference, as in the classic one between Kennedy and Nixon in 1960 and more recently George W Bush and Al Gore in 2000, in which Gore annoyed lots of voters by rolling his eyes while Bush was speaking.

Both the Obama and Romney campaigns on Friday talked up expectations for their opponents while downplaying their own candidate’s chances. The Obama campaign adviser David Axelrod predicted Mitt Romney would be a “prepared, disciplined and aggressive debater”.

Fears that the White House may be beyond the Republican party this year has already seen fighting start among conservative commentators.

The conservative commentator Charles Krauthammer, rounded on Romney, saying he had “fumbled” the opportunity offered by the Middle East crisis.

He argued that it is not too late for Romney. “Make the case. Go large. About a foreign policy in ruins. About an archaic, 20th century welfare state model that guarantees 21st century insolvency. And about an alternate vision of an unapologetically assertive America abroad unafraid of fundamental structural change at home. It might just work. And it’s not too late,” Krauthammer wrote in the Washington Post.

Jennifer Duffy, who covers the Senate races for the independent Cook Political Report, which had leaned a year ago to the Republicans taking the Senate, now argues that the range of possible outcomes goes from the Republicans picking up two or three seats â€“ not enough for a majority â€“ to actually losing a seat or two.

Charlie Cook, writing in the National Journal, said that if Romney does not pick up in the polls in the next week to 10 days, he faces “the very real prospect that Republican donors, Super Pacs and other parts of the GOP support structure will begin to shift resources away from helping him and toward a last-ditch effort to win a Senate majority â€“ which once seemed very likely â€“ and to protect the party’s House majority.”