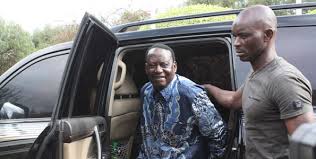 It was to the surprise of many liberal independent thinkers when the former Prime Minister Raila Odinga was ordered to remain with two vehicles and return the others. Shouts were made hoping they would fall on a listening ear but it seems it was in vain. Today, news hitting headlines indicate that Raila returned the vehicles on Tuesday and remained with two.
He once said, â€œRaila atarudia raia.â€ Amerudi.

From a VIP point of view, it is my belief that no any independent and liberal minded Kenyan will support the move as long as it is based on the deserving rights. Raila has been on attack from the government side of late as much as he has also been attacking government. But why engage politics and hatred in everything we do.

I try to do a simple arithmetic of what can happen if Raila wants to leave his premise and one of the vehicles break down. Will he have to share one of his seat with one of his bodyguards? Or are we going to advise bodyguards to be moving on foot so that Raila can have comfort he deserves in the vehicle?

How realistic is it to budget for thirteen people, among them a VIP two vehicles? Or are we going to give them Nissans from Japan that is fourteen sitters for the accommodation? If you understand this, help me also do.
Am sure before this decision was made, several measures were not considered. And now I request the concerned authorities to revisit it. I repeat again it is unrealistic. And if this decision was made on behalf of the president, I guess it wasnâ€™t and so I seek his intervention.

As you still think about it, think what the term â€œCo-principlesâ€ mean and then justify or unjustify your decision.God Bless Kenya, God Bless the people of Kenya.
I rest my case.