Taita Taveta County under Granton Samboja, Migori (Governor Okoth Obado) and Nairobi (Governor Mike Sonko) are on the spot for being ranked top in spending on trips in the first quarter of 2018/19 financial year with Sh143.53 million,Sh135.48 million and sh127.46 million respectively. A report by the auditor-general says the executive and the assembly used […]

The presidency which brings together the offices of President Uhuru Kenyatta and his Deputy William Ruto cannot account for billions of shillings allegedly used for confidential expenditures, the Auditor General has unearthed. In a new report, Edward Ouko reveals that in the 2015/2016 financial year, the Presidency spent Sh1,106,009,855 in secret expenditures, slightly higher than […] 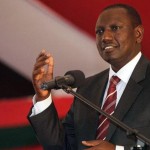 By George Jim Githinji Corruption in Kenya is rife from the top echelons of government to the grassroots level of public service and other organs of government. It affects all ministries of national government (and recently â€˜devolvedâ€™ to the county governments). The National Police Service (NPS), for example, has in subsequent years been declared the […]