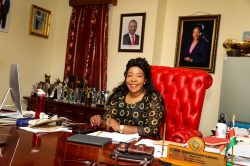 Agnes Kagure, who unsuccessfully contested the Nairobi gubernatorial seat, is being accused by lawyer Guy Spencer Elms of attempting to grab land in Karen owned by the late British businessman Roger Bryan Robson which is valued at Sh600 million.

In another case, Environment and Land Court Judge Oguttu Mboya in April issued a permanent order stopping Kagure from entering, occupying or claiming a plot in Nairobi’s Eastlands area valued at more than Sh20 million belonging to Joel Munene.

“The registration of the property in favour of Kagure was premised on illegal and unlawful documents and hence the same was plagued with illegalities, to the extent that the entire process was illegal, unprocedural and void,” ruled Mboya.

Mr Munene, in his suit, averred that he acquired the property in 2002 and obtained an allotment letter from Nairobi City County but when he went to get his title in 2016, he was informed that the property had been registered in Kagure’s name.

In the late Robson’s case, Mr Elms has been fighting with Kagure for the past eight years for the five-acre land in Karen.

The dispute started in August 2012 after the death of Robson who had left his properties to Mr Elms as his personal representative to take possession and manage the estate with instructions to sell them and share the proceeds between charitable institutions and his nephew.

However, Kagure, in her defence, went to court claiming ownership of the Karen property alleging that she had bought it from Robson at a cost of Sh100 million in November 2011 and accused Elms of forging documents to claim ownership.

Scandalous Kagure in her office

But when the case was up for hearing before Lady Justice Maureen Odero on Wednesday, a forensic examiner Jacob Oduor who was called as a witness confirmed that the documents by Mr Elms were genuine and not forgeries.

Mr Oduor is a documents forensic examiner based at the Ethics and Anti-Corruption Commission and told the court he confirmed a forensics report which showed Mr Elms is a victim of criminal gangs and land cartels who are bent on frustrating him to give up on the estates of Robson.

“I subjected the Police Forensic Document Examiner’s report used in the criminal complaint against Mr Elms to peer review as per the professional procedures and carried an independent forensic analysis of the documents he is alleged to have forged and found no forgery,” he said.

He added he found no motivation for Mr Elms to forge Robson’s signature on his probate documents just to donate to the charities.

The late Robson’s brother, Michael Robson, had also told the court that his brother did not sell his property to anyone before his death in 2012 and that the claims by Ms Kagure that she purchased the land are not true.

“I have been made aware that the said Agnes Kagure is laying claim to my brother’s property at Ushirika Road in Karen but I can confirm that my brother never disposed of the property or sold it to anyone,” said Michael, who said his brother had informed him of plans by certain people to grab his property by taking advantage of his failing health.

Michael testified that he is aware that Kagure is laying claim on the property on the basis that she purchased it from Robson in 2011 but that he wrote a handwritten letter to him on March 31, 2011, with no indication that he had sold it.

In another case, a widow, Ruth Wambui has sued Kagure for allegedly attempting to grab a quarter-acre plot in Makadara along Jogoo Road in Nairobi.

Ms Kimani averred that her late husband Kimani Mungai was the registered owner of the plot which he bought in 1997 and the family assumed ownership until 2015 when Kagure went to the plot claiming she had bought it at Sh10 million.

She held Mungai never sold the land but that Kagure colluded with the chief lands registrar to grab it.