A wide view of the Security Council in session. UN Photo/Paulo Filgueiras 15 November 2013 â€“ A resolution before the United Nations Security Council on the deferral of the International Criminal Court (ICC) trials of Kenyaâ€™s President and his deputy failed to pass when it was put to the vote today. Seven of the Councilâ€™s […] 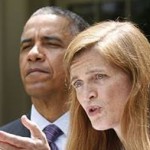 USUN PRESS RELEASE #233 November 15, 2013 FOR IMMEDIATE RELEASE Explanation of Vote by Ambassador Samantha Power, U.S. Permanent Representative to the United Nations, on Kenyaâ€™s International Criminal Court Article 16 Deferral Request, November 15, 2013 Thank you. The United States abstained on this vote because we believe that the concerns raised by Kenya regarding […]

Six Kenyans who were illegally removed from Kenya and taken to Uganda 3 years ago over the 2010 Kampala bombings are among 12 detainees on a go-slow at the Luzira Upper Prison protesting the delay of their case that has been pending before the courts since they were formally charged in 2011. The twelve have […]

President Uhuru Kenyatta waded into another divisive diplomatic issue when he expressly supported Palestinian push for statehood and revealed that Kenya is considering the restive Arab nationâ€™s request to build an embassy in Nairobi. The president, who met Palestinian leader Mahmoud Abbas on the sidelines of the ongoing Kuwait Arab-Africa meeting said his government will […]

The United Nations Secretary General Ban Ki Moon wants those who commit serious crimes against humanity not to go free. Moon wants all UN members to ratify the Rome Statute and commit themselves to the fight against impunity using both local mechanisms and international law. In a speech yesterday at the start of the ICC […]

President Kenyatta signed a co-ownership agreement (on behalf of his mother) with former Taita Taveta MP Basil Criticos on a 16 acres land the two used a s surety to acquire a loan of Sh60 million, but the first family refused to repay the loan, leaving Criticos to take full responsibility of repayment. Mr Criticos […]

When in 2012 one Mitt Romney, a venture capitalist like Uhuru made a comment, in response to a question about pay equity, on â€˜binders full of womenâ€™ whom he had recruited while at Bain Capital, his conglomerate, he lost that election. Now, in Kenya, we have one the richest man doubling as the president. Uhuru […]

By The New York Times Two Kenyan leaders charged with crimes against humanity have retaliated with an all-out attack on the International Criminal Court. Although Kenya is a court member, and President Uhuru Kenyatta and Deputy President William Ruto have agreed to cooperate, they are doing everything they can to discredit the institution by accusing […]

By Dikembe Disembe It is difficult to tell when the rain started beating Johnstone Muthama, the Senator for Machakos County. However, yesterday’s pronouncements and the futile court attempt to stop an event where the head of state has been invited opened an ugly twist to a sour relationship between the senator and the president. The […]

NAIROBI – In what could substantially send Â Uhuru direct to jail somewhere in Britain or Rwanda, if he so chooses, Â ICC Chief Prosecutor Fatou Bensouda now says she has telephone recordings of associates of President Uhuru Kenyatta inducing two key witnesses to withdraw their evidence. On Tuesday, Bensouda was allowed by the ICC trial chamber […]

The Morning After By Patrick Gathara @Gathara If you play with fire you get burned. That was the reaction of many Kenyans to the Jubilee-controlled Parliament’s passage of Â a draconian law which restricts their advertising and imposes massive penalties for infractions by journalists and media houses. Many think the Kenyan media had it coming. For […]

NAIROBI – City residents will be spared the vulgarities of flamboyant senator Mike Sonko and Representative Rachel Shebesh as the two are part of the official entourage of President Uhuru Kenyatta currently on a SADC tour in South Africa. Consequently, there will be no sin committed by the two in high-end hotels in Nairobi. The […]

NEW YORK – Thousands of victims of the Kenyan case involving President Uhuru Kenyatta have added to the government ongoing tribulations at the ICC when their lawyer, Fergal Gaynor, wrote a very stern letter to the United Nations Security Council warning of the legal consequences of granting Uhuru a 12 month deferral. The victims claim […]

NAIROBI – A High Court judge has disqualified herself from hearing a case in which two petitioners seek to bar President Uhuru Kenyatta from attending the Hague trials. Judge Mumbi Ngugi, who last month had determined a similar case directed petitionersÂ Â Ken Bartai and Felix Kiprono to seek legal redress at the Judicial Review Division of […]

NAIROBI – President Uhuru Kenyatta will on Wednesday head to Botswana after the two-day SADC meeting in South Africa beginning today, Monday. The official state visit is on the invitation of President Khama Ian Khama of Botswana. It is a big boost to a president who early in March had been warned by Khama of […]

By Netsanet Belay, CNN Like so many thousands of Kenyans, Pamela, David and Kanu are all still struggling to piece their lives together nearly six years after the violence that rocked parts of Kenya following the elections in December 2007. Finding work, feeding their children and recovering from physical and psychological trauma are just some […]

Reports indicate President Uhuru Kenyatta may have met with senior editors of most media houses at an invites-only dinner two weeks ago, a source in Nairobi has revealed. As members of the media (ooh, ‘us’) continue to whine and curse parliament, the president held a cocktail with Jubilee allied media houses where the Bill, among […]

THE HAGUE – The start of Kenyan President Uhuru Kenyatta’s trial for crimes against humanity has been postponed until February 5, the International Criminal Court said today. In a press release, the trial of (Presidnt) Uhuru Kenyatta before the ICC Trial Chamber V(b) to start on 5 February 2014 in the Kenyan situation. Initially, Uhuru’s […]

Senator Johnstone Muthama has said President Uhuru Kenyatta and Deputy William Ruto should handle their ICC cases at the Hague without dragging in the country. Citing the March 4 elections, the Senator said the fear of the ICC by Kenyan politicians prevented another bloodbath as leaders could not incite supporters. The Senator insists the country […]

By Chris Maina President Uhuru Kenyatta uncharacteristically came to the defence of Inspector General of the police David Kimaiyo over the scathing attacks he continues to get after summoning a section of the media. The President weighed in, telling Kimaiyo’s critics that sensitivity to the victims of the Westgate Mall terror, including the survivors, was […]