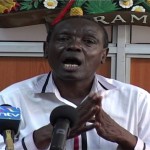 Former Government Spokesman Muthui Kariuki was on Saturday night involved in a serious accident while drunk at the Muthaiga roundabout. Muthui rammed into another vehicle which was being driven by a young motorist causing extensive damage to both the vehicles. The former spokesman who was driving a brown Lancer(a KBE) went further and threatened the […]