The student of the university of Nairobi whose body was found lifeless in the swimming at the institution’s main campus had all his clothes on, including the shoes. Students at the institution now claim their colleague may have been killed elsewhere and body dumped at the not-serviced swimming pool. When the body of the student, […] A fourth year economics student at the University of Nairobi was yesterday found dead in unclear circumstances at the institution’s swimming pool located in Main Campus. The lifeless body of the student, identified as Denis Maina, has been retrieved and the swimming pool is currently out of bonds for the students. There were mixed reports […] 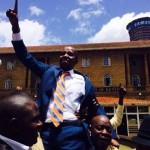 Yesterday Court of Appeal nullified election of a Mr Wanjohi as MP for Mathare North in Nairobi, Stephen Kariuki the validly elected MP was denied a certificate instead it was given to TNA’s Wanjohi by IEBC. A series of evidence backing up CORD’s allegations that the March 4th election was rigged continues to emerge, the […]

According to a ‘gossip’ news on Jackal NewsÂ Â Women Rep Shebesh, who not long ago had a bitter fallout with Sonko after semi-nude photos of the two emerged, has warned that she is not yet done with Sonko. WhileÂ Nairobi Senator Mike Sonko is known for his don’t care and ready to die attitude, now it seems […]

To all the haters out their SHAME ON YOU, this young girl is no joke, by the way she is 19 years NOT 16! Here is GHAFLA Kenya EXCLUSIVE on Vanessa’s HIV test, she made it on tape! Vanessa Chettle is the name that has been on everyone’s lips since Saturday. When Kenya-Post first wrote […] Newly re-elected Senate Minority leader Moses Wetangula survived an assassination attempt yesterday just hours after landing from Mombasa.Â The chilling incident on the CORD leader, also Bungoma County Senator, occurred at about 10.45pm along Mbagathi Road near City mortuary when the assailants repeatedly fired Wetangula’s car. He was heading to his Karen home. Here is a […] A week after a high court judge allowed a petition seeking stop the criminal prosecution of Gov Kidero over the September scuffle with Nairobi women Representative, fresh protesters stormed the governor’s office this afternoon carrying placards with pro-Shebesh messages. While the protest was initially seen as fighting over new stringent rules aimed at reducing tax […] By Joseph for THE HAGUE TRIALS KENYA “I will not talk for long. You know I am being monitored, and these people are here in large numbers, so I will be brief,” gushes the voice from the other side of the phone. The speaker is afraid of all the Kenyan security personnel who have appeared […] By Dikembe Disembe As the year ends, so is the politics of 2013. It is the year which saw kenya change the occupants of certain key offices including the president of the republic. Also, the new constitution ushered in various new elective posts, key among which was the re-establishment of the Senate. Initially, it appeared […]

Kenya’s leading higher education institution the University of Nairobi will reopen early January following the indefinite closure after students recently went on rampage following the death of a fellow student in police custody. Today, the institution’s senate met and resolved to resume studies and examinations as from 6th January next year. Below is the full […]