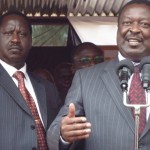 ANC party leader Musalia Mudavadi has dismissed claims that DP William Ruto is being sidelined in the Jubilee administration. According to him, the appointment of Interior CS Fred Matiangi by President Uhuru Kenyatta to oversee the coordination of national government projects is in line with the Constitution. Speaking on Wednesday, the former vice president noted […]