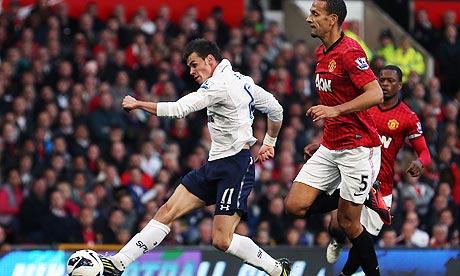 It was a match of extraordinary drama and in the end Tottenham Hotspur had their first victory at Old Trafford since 1989 and AndrÃ© Villas-Boas could reflect on his finest moment in English football. His team played with authority and togetherness and their supporters will like to believe that this result could be a defining moment under the direction of their ambitious new manager.

Spurs survived some fraught moments during the late, final onslaught as Manchester United tried desperately to demonstrate why there is probably no better side in the world at rescuing seemingly irretrievable positions. Eleven years ago to the day Sir Alex Ferguson was in charge of a team that came back from 3-0 down at half-time to score five times at White Hart Lane. Three years ago Spurs had a two-goal lead at Old Trafford before being swamped by five United goals in 22 minutes. This time there was no feat of escapology; no late, dramatic twist. The visitors dug deep, refused to crumple and now they surely deserve to be taken more seriously when it comes to the teams competing for the top places.

Ferguson will reflect that his players had left themselves with far too much to do after Jan Vertonghen opened the scoring inside the first two minutes and Gareth Bale brilliantly doubled the lead during a first half in which Spurs were magnificent, superior in every department, while United were so short of ideas their manager could barely explain it.

United did not burst into life until a second half that incorporated a high form of drama and began with three goals in as many minutes. Nani and Shinji Kagawa got two of them, but in between Clint Dempsey registered his first goal for his new club, while in that last half hour when Spurs had to defend for their lives, they did so in a manner that makes it feel absurd that Villas-Boas woke up to headlines about a mutinous dressing room.

Tottenham have been a soft touch far too often during that 23-year barren run at this stadium. They had to give everything here during those last moments and they did so with nerve and competitive spirit against a team that finished the game with four strikers on the pitch. Rooney hit the woodwork with a free-kick, a Michael Carrick header looped on to the crossbar and Robin Van Persie screwed his best chance of the match wide. There were penalty appeals, as well as any number of close misses. The Spurs of old would have capitulated but the new-look side refused to be cowed.

They had started the match as though affronted that their record on this ground could be so undistinguished. Bale was superb, staggeringly so given that he almost missed the match because of a virus. Mousa DembÃ©lÃ© excelled, just as he had when Fulham visited Old Trafford last month, reminding Ferguson of the talents that had seen United bid for him earlier in the summer. Vertonghen’s willingness to break forward and supplement attack, playing at left-back in place of the injured BenoÃ®t Assou-Ekotto, was one of the features of the game. Aaron Lennon offered width and penetration on the right. Jermain Defoe was sharp, lively and confident. In the opening 45 minutes Spurs played with great ambition, knocking the ball around with a lovely balance to the team. It was rare to see United lacking so many ideas on their own ground and, just as disappointingly for Ferguson, reacting so sluggishly to the shock of going behind so early.

From a United perspective it was a terribly soft goal to concede, but Vertonghen deserves an enormous amount of credit for his perseverance, surging into the penalty area and playing a one-two with Bale to elude the two nearest players, Nani and Michael Carrick. The Belgian moved inside Rio Ferdinand to take aim with his right foot and when Jonny Evans slid in to try to block the shot, he succeeded only in diverting it past his own goalkeeper.

Tottenham’s second goal was counter-attacking at its best â€“ fast, incisive and devastating. DembÃ©lÃ©’s clever pass set Bale running clear and from there the Welshman reminded us that when he is running full-pelt with the ball at his feet there are few more exciting sights in the sport. His change of direction and burst of acceleration was enough to keep Ferdinand at bay and the shot was angled perfectly to go across Anders Lindegaard into the bottom corner.

United’s improvement coincided with Wayne Rooney’s introduction as a half-time substitute, replacing the ineffectual Ryan Giggs and quickly making his impact felt, crossing from the right for Nani to direct a shot past Brad Friedel. The excitement was unremitting from that point. Within a minute smart work from Defoe teed up Bale inside the penalty area. Lindegaard saved but was hopelessly exposed as Dempsey put in the rebound. Straight from the kick-off United were on the attack again. Van Persie slipped a pass into Kagawa’s path and the Japan midfielder’s control and turn was exquisite, culminating in a shot just inside the post.

Villas-Boas has his own painful memories of United’s comeback habit, with a 3-0 lead becoming a 3-3 draw when he was at Chelsea last season. Now he had to endure some nerve-shredding moments at the end of the game, but William Gallas and his defensive colleagues excelled and the Stretford End howled with anguish. The final whistle went and the Spurs manager could be seen pumping his fists on the touchline.