Kenyaâ€™s patience has been tested severely and severally by her neighbours, but none of them has ever breached Kenyaâ€™s territorial integrity as brazenly as did Uganda yesterday at the Olympic Marathon. They can have Migingo for all I care, but Uganda must be made to understand that Olympic Marathon â€˜ina wenyeweâ€™ (has its owners).
This is exactly how the Ethiopians begun ~ the insignificant trickle that was Haile Gebreselassie is now the flood that are the Defars and Bekeles. We gave them an inch and they took a mile of Kenyan territory. The sad result of that mile is that they are now miles ahead as our Kips and Cheps wobble and pant in their wake.

The only valid reason any Kenyan would endure the pain of seeing our athletes outsprinted by Ethiopians to any Gold should be because they are not Ugandans. That is why the last Kilometer of the London Olympic marathon was very difficult to watch.

We must however be more worried by the message sent out by Uganda to other East Africans, than by the loss of that single medal. At this rate, emboldened by Kiprotichâ€™s feat, what guarantee do we have that APR of Rwanda will not send ten slender Nyarwandas to Iten with the specific brief to bag the Steeplechase and Marathon in Brazil in four years? Who says the Tanzanians cannot collect all tall Tanzanian Maasai boys named Rudisha, Regesha and such similar names and send them to the slopes of Kilimanjaro for four years? What about Mo Farahâ€™s message to little boy Somali nationals from Eastleigh to Mogadishu and London? Is it not that â€˜hawa ni Maembeâ€™? 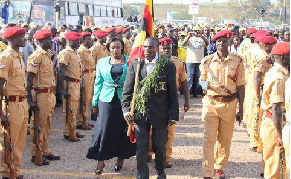 However, it is Ugandaâ€™s underhand methods that really irked me. Instead of training hard and beating us fair and square like the Ethiopians did, or purchasing some Kips from Eldoret and rebranding them like the Gulf States do, Uganda opted for deception. Aware that when God dishes out Marathon titles, He gives them to Kenyans mechanically and almost absent mindedly, they hatched a plot. They dressed one of their athletes in our colours and gave him a Kalenjin name. However, they did not give him just any Kalenjin name. They gave him the Kalenjin name next to which Sir God had scribbled the word â€˜Goldâ€™ at the top of His list ~ the name of the Kenyan that was the favourite to receive a Golden blessing from above. What cheek, these Ugandans!

The French tried the same trick too, but their Kiprotich stood out like a thumb. Watching the race, God must have wondered, â€œKiprotich in blue and white clad? Somethingâ€™s fishy hereâ€. On closer scrutiny, he called the French bluff and promptly peeled back the mask of the fake Kiprotich by turning off the Frenchmanâ€™s Kalenjin Lung Oxygen Turbo System and the poor Kip limped off early enough in the race, not cause any confusion later on. Not so for the Ugandan though. Because the Big Manâ€™s busy schedule could not afford him the time to micro-monitor the race. It only dawned on Him that He had been tricked when he saw the colour of the flag that was being waved by the Kiprotich who had â€˜chestedâ€™ the tape. Because it was too close to the end for God to do anything about it, and no barriers with which to trip the trickster, He let Uganda have it. â€œAfter all isnâ€™t regional integration the current buzz word?â€, he must have reasoned.

That the London Olympics left a bitter after taste in all Kenyans is a fact that needs no stating. This after taste left me reconsidering and rearranging my allegiances and allergies. One of those is my political affiliation. I doubt that I can bring my Kenyan self to voting for anyone whose name is Dr. Baba for the reasonable reason that that name is only one letter away from Dibaba. And there goes one of Raila Odingaâ€™s most ardent and dedicated votes. Further, I shall henceforth treat anyone who goes by the name Kiprotich as a foreigner unless such Kiprotich can furnish me with national identification documents to back any claim to being Kenyan.