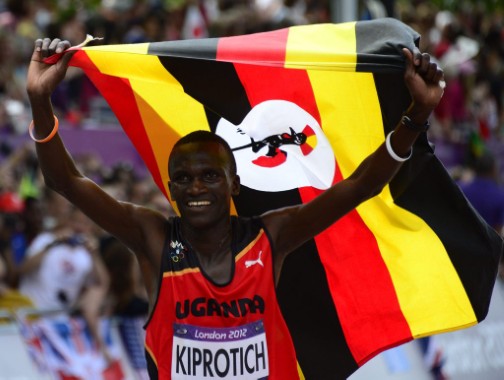 This article titled “Stephen Kiprotich’s Olympic marathon win gives Uganda second gold ever” was written by Sean Ingle on The Mall, for The Guardian on Sunday 12th August 2012 16.22 UTC

There was a violent, unexpected kick, followed by numerous glances over the shoulder. Had Stephen Kiprotich really got away with it? Yes, yes, he had â€“ and then he was gone, past the Houses of Parliament, past Buckingham Palace, on to the Mall and into the pages of history.

By winning the men’s marathon Kiprotich became only the second Ugandan to win Olympic gold. The first, John Akii-Bua in the men’s 400m hurdles, came in the Munich Games of 1972 â€“ while the country’s only other medal was a bronze from the 400m runner Davis Kamoga in 1996. It has been a long wait.

To call Kiprotich’s victory a surprise would be as much of an understatement as claiming the British weather in April and June was a bit drizzly. Most had suspected the race would boil down to another battle between those old rivals, Ethiopia and Kenya. Few were brave enough to suggest otherwise.

But the 23-year-old Kiprotich had other ideas. He was calm enough to allow the Kenyan Wilson Kipsang, the 2012 London Marathon winner, to establish a breezy 16-second breakaway before halfway, before being part of the pack that gradually reeled him in with nine miles remaining.

With three miles left, three men were left in contention: the race favourite Kipsang, his fellow Kenyan Abel Kirui, a two-times world champion, and Kiprotich. But then the Ugandan produced a thunderous injection of pace, the sort that scrambles a runner’s rhythm and shatters his morale, and never looked like being caught.

His winning time of 2hr 8min 1sec was 26 seconds clear of Kirui in second, with Kipsang in third a further 1min 10sec back. In due course Britain’s Lee Merrien was 30th, over nine minutes behind the winner, and his compatriot Scott Overall was 67th, over 14 minutes behind Kiprotich.

Afterwards Kirui â€“ who had the best view of an estimated 200,000 people who swarmed around the streets to imbibe London’s Olympic elixir a final time â€“ described the latter stages best. “I was thinking Kiprotich was fading away,” he said. “In my mind I thought I was going to have a sprint with Kipsang. Then I saw him go past me like a cheetah.”

Kiprotich sounded just as shocked. “Before the race I thought a Kenyan or Ethiopian would win,” he said. “I didn’t believe it could be me. But I kept in touch and, when it came to three miles to go, I just decided to go. I’ve joined the champions and I am very happy.”

What makes Kiprotich’s victory even more remarkable is his back-story. His parents are subsistence farmers in Kapchorwa, a tiny district on the Kenya-Ugandan border known for cattle rustling. He was a sickly child who missed three years of school due to an undiagnosed illness. As a teenager he was lapped in a school 10,000m race against runners his age and from 2003 to 2005 he quit athletics for two years.

“I decided to concentrate on my books,” Kiprotich said. “People were always castigating me for sitting on my talent but I felt I could gain a lot more from education.”

Kiprotich showed his potential by finishing 24th in the world cross-country championships in 2006. But it has taken a while for his talent to shine fully. Finishing 13th in the world championships last year showed glimpses but, with his personal best of 2:07.20 being around four minutes slower than the leading runners, he was not regarded as a major player at these Games.

How wrong everyone was. After the race Kiprotich credited his improvement to moving to the Eldoret region of Kenya’s Rift Valley, which straddles Uganda, to train with the former world 5,000m champion Eliud Kipchoge. “In Uganda we need better facilities,” he said. “I have asked our athletics federation for better facilities and they have been promising them without delivering. That pushed me to Kenya. I spend most of my time training there and visit Uganda to visit my family.”

Kiprotich’s victory meant a disappointing Games for Kenya’s middle- and long-distance runners ended on a humbling low. It is hard to overstate the dominance of Kenyans in the men’s marathon. In 2011 athletes from the country ran 144 out of the 150 fastest marathon times, while 278 Kenyans made the A-standard Olympic qualifying time. They expected to defend the title won by the late Sammy Wanjiru in Beijing but instead were upstaged by an athlete who lives, breathes and trains among them.

Afterwards Kipsang was sanguine, saying: “In competition the best athletes always win. He was the best today. The preparation was very high but sometimes you don’t always win.”

Meanwhile Kiprotich was all smiles, still struggling to comprehend that his journey from the slopes of Mount Elgon in Kapchorwa, Uganda, had ended with kissing the hot tarmac of the Mall as Olympic champion.

“I was unknown before today. Now I am known,” he said, his face shining bright enough to light up a galaxy. “I can say I am very happy to win a medal for my country. I love my people.”

Not, one suspects, as much as they now love him.