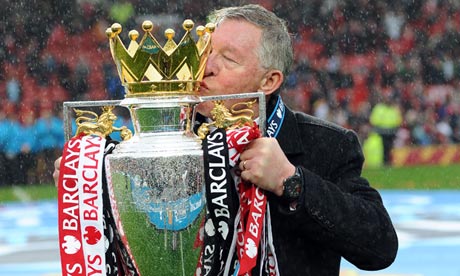 By Daniel Taylor, chief football writer for The Guardian, Monday 13 May 201

You know it is not a normal football match when stewards in fluorescent orange jackets have to be sent in to control the queues for commemorative programmes. About 20,000 of those glossy programmes are normally sold for a big occasion at Manchester United but for this game almost four times that number had been produced. The front cover bore a simple message: “Thank you Sir Alex.”

It was his final game at Old Trafford, with Sinatra playing over the loudspeakers, and the PA man, once he had gone through the long list of trophies accumulated (so long he needed to read them out from a script), neatly summed it up as “the impossible dream made possible”.

When Ferguson took over in 1986 his first photoshoot had been in the centre-circle and the stand behind him was a tired old concrete terrace with ugly spiked gates.

He leaves Old Trafford a very different place: gleaming, happy, just a little anxious about life without him but bearing up well. The mosaic of red, black and white coloured cards spelt out “Champions” in the most vertiginous of the four stands.

Behind one goal it was “20” glittering in gold, reflecting on the number of times the club have now won the league. At the other end it was “13” to signify the number that have come in the Ferguson era, on a day when the most successful British football manager in history said his farewell and threatened to “start bubbling” at one point.

Nobody actually believed there would be any tears. And sure enough, he held himself together for that farewell speech. He nailed it, too. He thanked all the relevant people. There was a paternal message for his players (“You know how good you are, the jersey you are wearing, don’t let yourselves down”) and a special mention for Paul Scholes, one of the great footballers of his 26 years in charge, now retiring too.

Typically, he also remembered that another of his players, Darren Fletcher, is recovering from an operation. He talked about how important it was for everyone at the club to trust his successor, David Moyes, and then he wound it all up. “I’m just going inside now. Thank you once again, from all the Ferguson family. They’re all up there [pointing to the stand]. Eleven grandchildren! Thank you. Thank you.” Life at Manchester United will never feel the same again.

Well, there is actually still another game to go. Ferguson has to take his team to West Bromwich Albion next weekend but it felt almost like an afterthought. It did not even ruin the mood too much when Wayne Rooney, left out of the squad after asking to leave the club two weeks ago, was booed when it was his turn to collect his league winner’s medal.

The party mood was soon back in full swing and, Ferguson being Ferguson, he could not have enjoyed all this properly without his team sending him off with a win. How typical that it was another of those late goals for which his teams have become associated. Not a classic “Fergie-time” moment, perhaps, but there were only three minutes left when Rio Ferdinand contributed the decisive moment. Swansea City had been difficult opponents but that goal felt almost inevitable. The game was won 2-1.

Later, Ferguson revealed that his mind had been made up to retire at Christmas and that he had even kept it from his brother. He said his sister-in-law had died and he owed it to his wife, Cathy, to make sure he spent more time with her. Nobody was impudent enough to point out that it was only a week ago that he was looking us in the eye and saying how much he was looking forward to next season.

But that’s just Ferguson and, ultimately, this style of management didn’t do too badly bearing in mind that when he came out of the tunnel before kick-off the fourth official was holding up the electronic board to show how long he had been in charge and how many trophies he had brought to the club: “26-38.”

At first, he looked just a trifle embarrassed by all the fuss. His hands were firmly entrenched in his pockets as he came out of the tunnel before kick-off, emerging through the guard of honour his players had formed, with that slightly impatient walk of his. A brief clap to the crowd, nothing too extravagant.

He quickly had his match face on. At one point the television cameras flashed on him and he had both arms outstretched and that familiar look of outrage on his face. His team had just been denied a penalty and all the old instincts came to the surface. He resisted the temptation to march down to the touchline to give the fourth official an earful but it felt like a close-run thing.

The volume was tremendous. Old Trafford gets a lot of stick because the decibel levels are not higher, to the point United have consulted with sound engineers about ways to improve the atmosphere. The plastic red and white flags felt a bit, well, plastic. But this was one of the noisy days. It was also a day when we were reminded why, all those years ago, a young Bobby Charlton described this place as “the Theatre of Dreams”.

“Sir Alex â€“ Immortal” read one banner. Others had their own tributes. “Fergie, bloody hell”, was one, an adaptation of his most famous quote of all, delivered after the late drama of the 1999 Champions League final. Another homemade flag hung over the top tier of the old Stretford End: “26 Years for a Lifetime of Memories.”

As promised, the supporter who had lifted that infamous banner in 1989 calling for Ferguson to be sacked had brought an updated version. Pete Molyneux’s original, going back to the days when Manchester was “Madchester” and Ferguson could hardly buy a win, bore the words: “Three years of excuses and we’re still crap â€“ ta-ra Fergie.” The replacement reflected on the next phase of Ferguson’s time at Old Trafford: “Twenty-three years of silver and we’re still top â€“ ta-ra Fergie.” It was raised in the 55th minute, just like it had been the last time, and from exactly the same seat.

Red Issue, a fanzine that has been around for almost the entire Ferguson reign, had him on their front cover in classic Fergie mode: arm cocked, looking down at his stopwatch. The speech bubble read: “Bloody hell, is it time already?” And now it was â€“ at least once he had gone through the business of lifting the Premier League trophy, while a gaggle of young children with a tell-tale “Grandad” emblazoned on the back of their shirts waited to the side. He will miss those kind of moments.