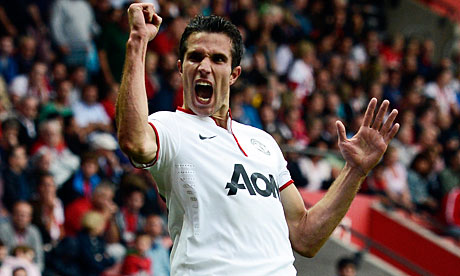 Believe it or not, there was a point here when Robin van Persie seemed dangerously close to experiencing what it is like to feel the snakelick of Sir Alex Ferguson’s tongue. The Dutchman had missed a penalty, trying a disguised chip that ended in embarrassment, and Ferguson was facing the distinct possibility that it was going to be the defining moment in Manchester United‘s 1,000th game on his watch.

What happened next was nothing short of extraordinary. Van Persie’s equaliser arrived after 87 minutes and the game had moved into stoppage time when his header flashed past Kelvin Davis for a hat-trick winner. He had turned the game upside down, having tempted us to believe this was going to be one of those rare days when he was the player waving an apologetic hand.

Football can be brutal sometimes and Southampton will know now how unforgiving the Premier League can be for newcomers. They had played with great spirit and togetherness and United were so generous in their defending it could not have been described as unjust if the home side held out. Instead, there was something deeply impressive about the intent with which Van Persie ensured he had the final say.

He had already demonstrated his brilliant penetrative qualities in the first half, lashing a left-foot shot beyond Davis to make the game 1-1 seven minutes after Rickie Lambert’s header had opened the scoring.

Southampton went back into the lead again when Morgan Schneiderlin, the home side’s outstanding player, capitalised on a slip from Patrice Evra to head in Lambert’s cross and Van Persie’s penalty miss felt almost in keeping with what was a dishevelled United performance at times. Then, in the space of five minutes, everything changed.