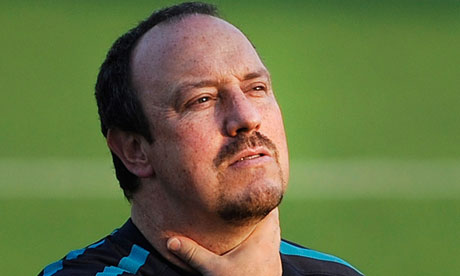 Rafael BenÃ­tez is due to meet the Chelsea squad for the first time at Cobham on Thursday. Photograph: Michael Regan/Fifa via Getty Images

Chelsea have appointed Rafael BenÃ­tez as their interim manager until the end of the season after the European champions reacted ruthlessly to the team’s recent slump by sacking Roberto Di Matteo only six months after he won the Champions League.

BenÃ­tez cut short a stay in the Middle East, where he was delivering a coaching seminar to the Abu Dhabi Sports Council, and flew to the United Kingdom on Wednesday night to rubber stamp his return to the Premier League. The club still aspire to securing Pep Guardiola next summer, when the former Barcelona manager has suggested he will return from a year-long sabbatical, though his compatriot will now effectively have an opportunity to stake his own case to take the job on a long-term basis before then.

The Chelsea hierarchy had informed Di Matteo that he was to be relieved of his duties at around 4am on Wednesday morning following the team’s return from their Champions League loss to Juventus. The club then held an emergency board meeting at Stamford Bridge during the day at which they decided to pursue their interest in BenÃ­tez in preference to the mooted potential reappointment of Avram Grant. The Spaniard, who had been approached earlier this year when AndrÃ© Villas-Boas was in charge and offered similar terms only to seek a longer deal, duly became the club’s ninth manager in as many years under Roman Abramovich’s ownership.

At the club’s training base in Cobham on Thursday he will meet his new players, including Fernando Torres, who flourished under his management on Merseyside. BenÃ­tez must set about winning over deeply sceptical Chelsea supporters, starting with Sunday’s visit of the league leaders Manchester City and with memories of his Liverpool side’s scraps against Chelsea still all too raw.

Chelsea had been courting Guardiola aggressively in recent weeks, hoping to lure him from his break, but he has reiterated his desire to remain in Manhattan with his family. While the club are hopeful he can be persuaded to join in the summer, he has offered no guarantees he would be willing to take up the reins at Stamford Bridge when he seeks a return to the game.

Regardless, he appears to remain Chelsea’s long-term ideal as manager. “Pep will not decide which club he will coach until January or February,” said the 41-year-old’s agent, Josep Maria Orobitg. “He will be the only one who decides his future because he is a strong personality. Right now he is resting, reading, watching football. In January he will start to think about what team he wants to coach.”

Di Matteo’s final match in charge proved to be the humiliating 3-0 loss to Juventus on Tuesday night, a game that effectively leaves the holders on the verge of exiting the Champions League at the group stage. Moves had been afoot over the past month to pinpoint a potential replacement with the team’s form so stuttering â€“ they have won only twice in eight matches, and not kept a clean sheet in 10 â€“ and the hierarchy had even considered wielding the axe after Saturday’s loss at West Bromwich Albion. It was only once Guardiola’s position had been restated and BenÃ­tez had indicated a willingness to take on the role that permission was given to the chairman, Bruce Buck, and the chief executive, Ron Gourlay, to act.

Chelsea arrived back at Gatwick airport at around 2.30am on Wednesday morning with the Italian accompanying the squad back to their training base at Cobham, where Buck and Gourlay met him in his office. They cited recent results as unacceptable, pointing to the defensive frailties and imbalance to the team that had shown little sign of being rectified. Then they relieved him of his duties. By 4am he had cleared his desk and said his goodbyes, with his assistant Eddie Newton expected to follow him out of the club. A brief statement published on the club’s website on Wednesday morning thanked him for guiding Chelsea to “an historic Champions League victory and a seventh FA Cup” over his 262 days in charge, but added: “The team’s recent performances and results have not been good enough and the owner and the board felt that a change was necessary.”

Di Matteo later released a statement on the League Managers Association website in which he said: “It was an honour for me to be appointed manager of a club that I loved playing for and one that is so close to my heart. I am extremely proud of the successes and trophies that we were able to bring to the club in recent months.

“Lifting Chelsea’s first Champions League trophy, in Munich, was the best achievement in club history and without doubt the highlight of my career to date, both as a player and manager. It is a memory I will treasure for the rest of my life.

“I have a deep and unreserved passion for Chelsea Football Club and I would like to sincerely thank all of the staff, my players and of course the Chelsea fans, for their tremendous and unconditioned support in the intense time I have been the manager at the Bridge. I wish all of them every success for the rest of the season and beyond.”

He leaves behind a disappointed dressing room â€“ Juan Mata described Di Matteo as “a legend” when the news was confirmed â€“ and a team in need of reorganization, a task BenÃ­tez will attack with relish as he seeks to ensure the recent downturn does not wreck the club’s entire season. Even a club as rich as Chelsea, currently third in the table, cannot afford to slip out of the Champions League with the likelihood of a Europa League campaign to come. Therefore the new manager should see his squad strengthened next month.