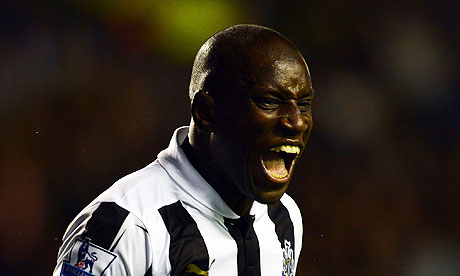 Demba Ba, Peter Crouch and Victor Anichebe will hope to make striking impressions and we shouldn’t forget how much events on the pitch, as well as off it, will matter at Anfield

Seeing if Arsenal are the real deal

Two wins, two draws, eight points collected, eight goals scored, and one conceded â€“ it has been an impressive start to the season for an Arsenal side that was expected to struggle after Robin van Persie’s departure. ArsÃ¨ne Wenger’s men look better organised defensively and, in attack, threatening from a number of different sources. The new signings Lukas Podolski and Santi Cazorla have settled in well and, after last week’s 6-1 win against Southampton, Wenger suggested his side had the collective spirit to mount a genuine challenge for the title.

But it is only now that the true test comes for Arsenal. They travel to Manchester City on Sunday and, should they record an impressive draw or a victory, then it really would be time to sit up and take notice of a team that have flattered to deceive so often in recent seasons. Arsenal can take hope from how they performed at the Etihad Stadium last season, losing a close encounter 1-0, and that City have failed to keep a clean sheet in their six matches this season. Whatever the outcome, this should be an enthralling encounter.

Peter Crouch on the campaign trail

The Stoke City striker reckons he’s still worth a place in the England squad but Roy Hodgson apparently doesn’t. What better way for the player to change the manager’s mind than by bullying his first-choice centre-back when Stoke go to Stamford Bridge on Saturday? With a bit of luck, he may even change Hodgson’s mind about John Terry.

The reaction of Manchester United’s supporters

Anfield will be a hotbed of emotions on Sunday, hosting a match for the first time since the Hillsborough Independent Panel released its report into 1989 tragedy that led to the death of 96 Liverpool supporters. There will be a sense of anger, sorrow and vindication running through the Kop, but it is fair to say the eyes and ears of many in the outside world will be mainly trained on what is happening in the away end.

Manchester United, and Sir Alex Ferguson in particular, have made admirable efforts during the past week to show their support for Liverpool and the justice campaign and the plea from Old Trafford has been for their supporters to do the same at the weekend. Various sections of the club’s fans base have made clear their intentions to do just that but, given the rivalry that exists between the two clubs and the ill-feeling that remains from the Luis SuÃ¡rez-Patrice Evra affair, not all United fans can be expected to behave.

Indeed, a minority were heard singing anti-Liverpool chants during United’s 4-0 win against Wigan last Saturday and the only hope now is that they are either not in attendance at Anfield or have learned to behave in the past week. Otherwise a poignant occasion is under serious threat of being marred by puerile hatred.

If Adam Johnson regains fitness in time, Sunderland could squeeze three fine wingers into their team this weekend, with the former Manchester City trickster joining James McClean and Seb Larsson. Steven Fletcher is one of the best headers in the Premier League. Curiously, Sunderland have yet to muster a header on target this season: you get the feeling that stat will start to change dramatically. And there could be few more fitting places for it to do so than in Sam Allardyce’s backyard.

The ‘start’ of Southampton’s season

Given his ultra-positive nature it was not a surprise to hear Nigel Adkins speak in upbeat tones following his team’s 6-1 defeat at Arsenal. The Southampton manager accepted his side had been thoroughly outclassed at the Emirates Stadium and needed to improve their defending having conceded 14 goals in their opening four matches of the season â€“ four matches that had ended in defeat â€“ but was confident the good times lay ahead. “We have that belief that we are doing the right things,” he said. “Now it is making sure we continue the resolve to score goals and keep them out at the other end.”

Such sentiments are fine after you have been forced to play Manchester City, Manchester United and Arsenal in your opening four games, with the other being a match against Wigan that Southampton lost but performed well in, but at some point the rhetoric has to be replaced by winning displays for a club that spent more than Â£30m in the transfer window and have ambitions of becoming an established Premier League side.

Well, that moment has come for Southampton, with their manager claiming Saturday’s visit of Aston Villa marks the start of their season. A clean sheet would be ideal while a victory is practically a must. Lose again and the Saints are likely to be marching into a long, bleak winter.

There are some things no football manager should tolerate: personal abuse, tantrums from subs, and losing to the current Aston Villa team. Swansea City were harassed into submission by Paul Lambert’s side last week and Saturday’s opponents, under the guidance of David Moyes, are even more dynamic, as Swansea well know, since Everton were the most dominant visiting team at the Liberty last season. It will be interesting to see what sort of reaction Michael Laudrup stimulates. Similarly, Steve Clarke had his first major setback of the season last week and watching the response of his West Brom team promises to be revealing. And not necessarily enjoyable for Reading.

Or not, as the case may be. It is hard to fathom what is going on with the Senegal striker, who made an impressive impact at Newcastle last season before the goals dried up somewhat, albeit due in part to a positional shift made by Alan Pardew to accommodate Papiss CissÃ©. Ba began this campaign with a goal against Tottenham but there has been a sense of unease about his relationship with Pardew and matters were hardly helped after the striker’s agent, Alex Gontran, described the manager’s decision to leave his client out of the team that faced Everton on Monday as “crazy”.

The 27-year-old came off the bench to score two goals but instead of showing his gratitude Pardew criticised Ba for allowing such comments to come out and has since expressed his belief that the player could leave in January due to a clause in his contract. All of which places much intrigue over his selection for Sunday’s visit of Norwich. Ba should feature given he started all of Newcastle’s Premier League games before the visit to Goodison Park and should Pardew leave him out it would be hard not to believe that there has been a breakdown in the manager’s relationship with the striker.

Everton have had striking problems for years. Everton have also had Victor Anichebe for years. But the Nigerian has seldom seemed the solution: always a prospect, never quite ready for the present. There have been times when he has thrilled off the bench, only to flop when given a start. And there have been times when he has been the only striker available and David Moyes has picked Tim Cahill up front instead. Despite that, and a tiff with the manager in 2009 and a couple of cruel injuries after that, Everton have never given up on Anichebe. The superb swivel and shot that led to his goal against Newcastle on Monday showed why, as did his header that was wrongly disallowed. With Nikica Jelavic injured, Anichebe, 24, deserves another chance to start a match and belatedly kickstart his career.

Poignancy aside, there is a football match taking place at Anfield on Sunday and, along with the interest and excitement that surrounds any meeting between Liverpool and Manchester United, there is the increasingly desperate desire of Brendan Rodgers to record his first Premier League victory as manager of the Merseyside club. It is two defeats and two draws for Rodgers so far and, while excuses can be made regarding the tough nature of Liverpool’s opening league games, they cannot continue to fall short for too long. The Northern Irishman will also be aware that as far as the club’s supporters are concerned, there would be no better time to get off to winning ways than against their greatest rivals.

The hosts should be relatively fresh given the bulk of their players did not travel to Berne for Thursday’s Europa League game with Young Boys and so there should be no repeat of the sluggishness that led to Liverpool losing to Arsenal in their last league match on home soil. And should the high-tempo, high-pressing, possession-based style of play Rodgers adheres to click, we could be in for some afternoon, with the hosts taking the match to opponents who can be utterly devastating on the counter.

These may well be the Premier League’s two weirdest teams. Each should turn up in a Panini sticker pack, since you never quite know what you’re going to get from them. Fulham’s capacity to delight and baffle in equal measure has surely been augmented by the addition of Dimitar Berbatov but Wigan are actually showing signs of findings consistency. They have not recaptured the form that saw them storm clear of relegation last season but, though results don’t show it, they have not been far off it despite injuries and misfortune. They could give Fulham the runaround. Or Hugo Rodallega could shock the DW with a hat-trick. This one promises to be fun.