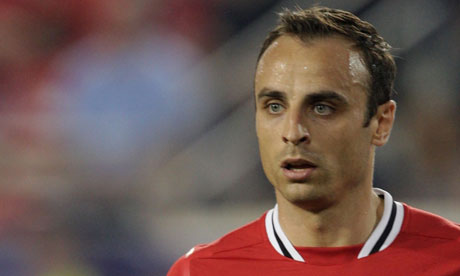 Manchester United’s Dimitar Berbatov is set to complete a move to Fulham after rejecting Fiorentina. Bulgarian previously worked with Martin Jol at Spurs

Manchester United‘s Dimitar Berbatov is undergoing a medical at Fulham ahead of completing a Â£4m move, their manager Martin Jol has confirmed.

The Bulgaria international, who previously worked with Jol at Spurs, had been expected to leave Old Trafford for Fiorentina on Wednesday.

Jol said he believes the deal, reported to involve a fee of around Â£4m for a player who cost United over Â£30m in 2008, is a signal of Fulham’s ambition.

“Of course you have to pay good players good money but I think we have made steps over the last few years and there have been many clubs interested in Dimitar.”

Fiorentina earlier suggested that the former Bulgaria captain had reneged on a move to them in order to sign for Juventus. A statement accused Juve of “reckless and arrogant actions which have nothing to do with the values of honesty, fair play and ethics of sport and that lie beyond the boundaries of loyalty”.

But the Juventus director general Giuseppe Marotta dismissed those claims before confirming Fulham was the most likely destination.

“We have much to discuss with Fiorentina,” he told Sky Sport Italia. “I reject their allegations. We entered into the business over Berbatov when we heard that he had refused Fiorentina, and in the meantime there was a proposal by Fulham.

“We made our own, then the player said he preferred to stay in England for family reasons. It was not a rejection.”

Jol, though, said he was unaware of any formal link with Juventus.

“Nothing is what it seems, I’m not sure about Juventus,” he said. “But he was on my list the whole time and he knew that. I tried to do something months ago and it didn’t come off and when I came back for him it was the right moment to make a decision.”

“Maybe you saw a few things on the internet, they all tried to get him but we were able and capable of getting him. Hopefully everything is good and that means we are doing the business.”

Berbatov’s arrival may not be the end of Jol’s transfer dealings before the transfer window closes on Friday ahead of Fulham’s early kick-off at West Ham United on Saturday.

The 56-year-old confirmed talks are still ongoing with Sunderland over a potential deal for the England international Kieran Richardson.

“We are talking to him and hopefully he will come to us,” he said of Richardson. “We are also working on more players: we lost eight players and three players came in.”

Jol was upset following the departure of Moussa DembÃ©lÃ© to Spurs and still expects the USA international Dempsey to depart before the window shuts.

He said: “With Dempsey there is still nothing on the table. Of course we are talking to different clubs but it is up to him â€“ you know his desire to go to a Champions League club.

“It is always difficult in football, there are different clubs with different scenarios and different options. We know exactly what we want and if other clubs come up with the right deal we will probably do it.”