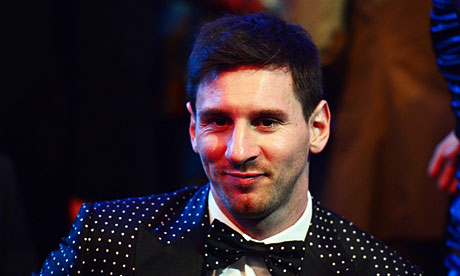 Another record falls. Lionel Messi finished 2012 on 91 goals in 69 games. He began 2013 by winning the Fifa Ballon d’Or (with 41.6% of the votes), Cristiano Ronaldo (23.7%) came second and AndrÃ©s Iniesta (10.9%) third. It is the fourth time Messi has won it and no one else has won it so often. Because the award is a merger of the old European Footballer of the Year and the Fifa World Player of the Year which was inaugurated only in 1991, Diego Maradona never won it and nor did PelÃ© but it is doubtful if they would have matched Messi’s achievement. Marco van Basten won the European award three times in five years, Johan Cruyff three in four and Platini three years in a row. Alfredo Di StÃ©fano won it twice. Messi has superseded all of them.

Months of speculation slowly gave way to a growing realisation, especially as the European Championship was left behind and Messi accelerated towards the end of the year: it was going to be him again. He scored twice in each of eight successive games and they were almost all goals of barely plausible brilliance; when he scored only once in his final game of 2012, it was as if he had underachieved. On Monday night, finally it was confirmed. “The good thing about the Ballon d’Or is that it’s being handed out tomorrow,” the Barcelona coach, Tito Vilanova, had said the night before. Everyone could get on with their lives, talk about something else for a change.

Hardly: first there will be the reaction and then it will not be long before talk turns to next year’s award â€“ except that right now it is hard to imagine anyone else walking away a winner from Zurich in 12 months’ time. 2012, like 2010, was an opportunity for others but Messi swept all before him again â€“ all the excitement, all the debates, all the headlines and the same winner. “To tell you the truth this is really quite unbelievable,” Messi said. “The fourth award that I have had is just too great for words.”

Michael Owen recalls how GÃ©rard Houllier had to pull him aside after he won the Ballon d’Or in 2001 and impress upon him the significance of the award. Owen had taken it in his stride; Houllier was shocked at how blasÃ© he was. In France, he insisted, it is huge.

So it is in Spain. The Ballon d’Or has become more important in England over the decade since international football, projected by the Champions League, carried by a television and internet boom, accessible in a way unthinkable 10 years ago, is followed far more closely than it was then and European exposure brings European tastes. But, at least while the candidates all reside south of the Pyrenees, the interest still does not match that of the Spanish.

Only one Spaniard has won the award: Luis SuÃ¡rez in 1960. Many have never forgiven Owen. Some consider it a grave injustice that RaÃºl did not become the second; 2001 was the year when RaÃºl’s candidacy was at its strongest; the England striker’s Ballon d’Or was “rightfully” RaÃºl’s. Similarly, had Owen not been a former winner, Real Madrid’s president Florentino PÃ©rez would surely have been less interested in signing him: here was another one for the collection, status guaranteed. An “objective” measure of the best player in the world.

Just as with RaÃºl, a sense of injustice exists now. It is quieter but it is there. This Spain side is the most successful international team there has ever been. But none of its players have won the award. In 2010 even Messi seemed surprised to finish ahead of Xavi and AndrÃ©s Iniesta. Here Iniesta was Spain’s sole representative â€“ the winner of Uefa’s Best Player in Europe award following Euro 2012. “I don’t need individual awards to feel recognised; football is a collective game,” he said. But that collective success, some argue, should have been recognised in this award.

Spain’s media and fans remain divided along club lines, though. Over 60% of the country declares itself a fan of Madrid or Barcelona and sports newspapers wear their club colours unashamedly. Even the idea of a Spanish winner only unites them at a superficial level: they want a club winner. When the list for the team of the year was released the front cover of AS said it all: “Madrid 6 Barcelona 5”.

And so it is that the battle comes back down to the two men who have come to represent Spain’s biggest two clubs, the personification of the greatest rivalry. Messi had already admitted that he would be voting for Xavi, Iniesta and his Argentina team-mate Sergio AgÃ¼ero; asked why he did not vote for Messi, Ronaldo said the reason was simple â€“ he had not voted at all. Injury meant that he missed international duty and his voting papers were passed to a team-mate â€“ who voted for him.

By the time the ceremony came round, Ronaldo had got used to the idea that he was not going to win: “This is not a life and death issue,” he said. In August he had insisted: “I only want justice to be done.” JosÃ© Mourinho, who did not attend despite being short-listed for the managerial award, bemoaned that Messi would win, “after the campaign that has been carried out”. Yet the most aggressive campaign had been his own in favour of Ronaldo. “How can Messi win the Ballon d’Or without winning the league or the Champions League?” Mourinho asked.

Last year Messi picked up almost half the votes; there was no question. This time a case can certainly be made for Ronaldo, who helped carry Real Madrid to the league title, taking it from Barcelona for the first time in four years and breaking an all-time points record. He scored the goal that effectively clinched the title at Camp Nou, one of 63 he scored in 71 games. Ronaldo, like Messi, reached the Champions League semi-final and, like Messi, missed a penalty. But Ronaldo missed his in the shootout having scored in normal time.

At Euro 2012 Portugal reached the semi-final where they were defeated by Spain; Ronaldo was down to take the final penalty but never got the chance. Messi, of course, was not there. At team level Messi won only a Copa del Rey.

But then he scored more goals than anyone in a calendar year (the last man to hold the record, Gerd MÃ¼ller, did not win the Ballon d’Or: Franz Beckenbauer did in 1972). Messi finished as the Champions League’s top scorer for a fourth year in a row. And he started to do the one thing that everyone agreed he still had pending: perform brilliantly, consistently, for Argentina: his 12 international goals included a hat-trick against Brazil.

This is a wider electorate now than the ones used for either of the awards that preceded it. With the old system, where only journalists voted, Messi would not have won in 2010. With 600 in the electorate now, the criteria are widened and yet also narrowed; virtually no one is going to leave Messi out of their top three.

Beyond the analyses there is a very simple question: who is the best player in the world? Few would doubt that the answer is Messi. “For as long as Messi is around, the Ballon d’Or makes no sense,” Dani Alves said, and AgÃ¼ero concurred: “The Ballon d’Or will always be for Messi.”

Messi is 25. It may be a long wait for someone else.

Fifa World XI of the Year