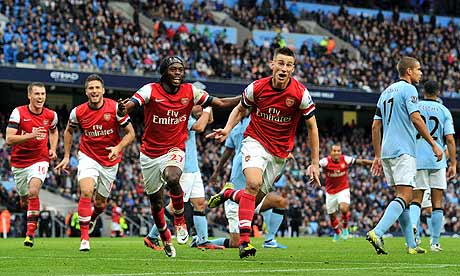 Manchester City are so deeply unaccustomed to dropping points on their own ground that Arsenal are entitled to consider this performance as evidence that, at the very least, they can have more input on the title race than they managed last season.

ArsÃ¨ne Wenger’s team left it late to equalise, Laurent Koscielny lashing the ball past Joe Hart after 82 minutes, but they deserved the point and can be encouraged by the way they frustrated the champions.

City rarely played with the style and panache that has made the Etihad Stadium, with no home defeat for getting on two years, the most formidable territory in the Premier League. Joleon Lescott’s headed goal from David Silva’s corner, five minutes before half-time, was against the run of play and it was rare to see them play with such carelessness.

Wenger’s team always displayed a little more poise, with Santi Cazorla impressive again, and their momentum was building by the time the Spaniard swung over a corner from the left and Lescott’s defensive header went straight to Koscielny. His first touch controlled the ball, the second was a shot that was still rising when it went into the top corner.

Arsenal had also endured periods when their passing was slow and indecisive and City will reflect on the shot that Sergio AgÃ¼ero flashed wide barely a minute after the equaliser. City, however, looked leggy and short of ideas, unable to take control once Lescott had taken advantage of some generous defending to put them in front.

Kieran Gibbs was culpable in the build-up, conceding a soft corner, and Vito Mannone’s attempt to get to the ball was poor in the extreme. Lescott had Lukas Podolski and Koscielny in close proximity but still managed to divert the ball inside the far post. Yet City seldom demonstrated why they had taken 76 points out of 78 on their own ground going into this match.