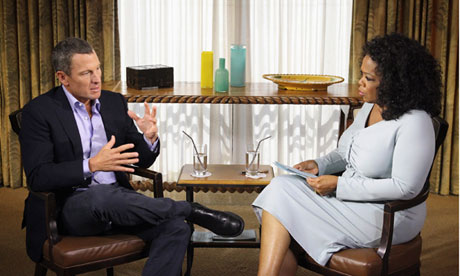 In the first part of his televised interview with Oprah Winfrey, Lance Armstrong answers questions regarding his use of performance-enhancing drugs

Lance Armstrong has admitted for the first time that he doped to win all seven of his Tour de France titles, turning his back on years of denials and confessing that his storied career at the top of competitive cycling was fuelled by drugs, lies and bullying.

In a television interview with Oprah Winfrey broadcast on Thursday night, Armstrong said it would not have been possible to win the titles without cheating, such was the prevalence of performance-enhancing drugs in the sport at the time.

However, Armstrong, 41, denied being a mastermind who threatened other team-mates to dope, and rejected allegations that he bribed the International Cycling Union and a Swiss laboratory to cover up his cheating. He also denied taking drugs during his comeback in 2009 and 2010, and did not indicate â€“ at least not in the first of a two-part broadcast â€“ whether he would cooperate with the anti-doping agency Usada so that he can return to competitive sport, as has been reported.

This limited confession will fuel suspicion in some quarters that it was a made only because Armstrong was backed into a corner after an excoriating report from Usada last year and that, in a strategy devised by his close-knit team of advisers, he chose to withhold the full truth in an attempt to avoid criminal prosecution.

Winfrey opened the interview with a series of questions, to which she requested “yes or no” answers from Armstrong. Asked if he used drugs to win his Tour titles he replied: “Yes.” Asked if they included steroids, EPO and PED, he said: “Yes.” Asked if it was humanly possible to win the Tour seven consecutive times, as he did from 1999-2005, he said in his opinion it was not. “I view this situation as one big lie that I repeated a lot of times,” he said.

The confession, even if widely deemed partial, was a dramatic turnaround for a man who has spent two decades defying and threatening those who challenged his record.

Dressed casually in a navy blazer, blue shirt and slacks, Armstrong looked tense and at times bristled while casting himself as a flawed, contrite human being who got caught up in a “culture” of doping, which, he implied, included most riders of his generation. “I didn’t invent the culture and I didn’t try to stop the culture … and the sport is now paying the price of that and I’m sorry for that. I didn’t have access to anything else that nobody else did.”

He said he “lost himself” in the fairytale narrative of an athlete who battled back from testicular cancer to triumph in cycling’s most gruelling race, raise a beautiful family and launch a cancer charity, Livestrong. “The truth isn’t what I said. And now it’s gone … this story was so perfect for so long.” At times slipping into the second person, he said: “You won the disease … it was this mythic perfect story. And it just wan’t true.”

The interview, a huge scoop for Oprah’s Los Angeles-based Oprah Winfrey Network (OWN), was broken into two 90-minute segments, the second of which will air on Friday. Seated with his legs crossed in a armchair at the Four Seasons hotel in his home town of Austin, Texas, Armstrong rejected claims that his leadership of the US Postal Service team represented the biggest and most sophisticated doping enterprise in sport. “No, it was definitely professional, and smart if you can call it that. But it was very conservative, and risk-averse. But to say that programme was bigger than the East German doping programme of the mid-1980s … not true.”

He said he did not remember stashing syringes in Coke cans â€“ an incident described in a book by his fellow rider Tyler Hamilton. “I didn’t read Tyler’s book … I don’t remember that, i’m not going to say that’s a lie.

Armstrong said the doping during his triumphs â€“ which revolved around oxygen-boosting drugs to improve endurance â€“ was brazen and not at all threatened by testing during and after races because the cheating happened before. “So you’re not going to get caught. Because you’re clean at the races, clear. It’s a question of scheduling.” Out of competition testing and the biological passport had since cleaned up the sport, he said.

Challenged by Winfrey over multiple accounts that he ordered teammates to dope, he appeared to squirm. “I was the top rider … the team leader but not the manager. There was never a direct order or directive that you have to do this. We were grown men, we all made our choices.”

He denied threatening to expel those who refused to cheat but conceded the “level of expectation, of pressure” could have compelled some riders to do so.

Armstrong, who was closeted with his advisers in advance of the interview, cited his mother and his cancer for reasons he was so competitive, but admitted doping before the cancer. The cheating programme was so effective he knew he was going to beat rivals. “Those tours … I knew, I knew I was going to win.”

He declined to confirm that his long-term doctor, Michele Ferrari, was complicit and said he was a good person. “There are people in this story that are not monsters, are not toxic. I’m not comfortable talking about other people.”

Calling himself a “jerk” as well as a humanitarian, he said he was flawed and wrought the disgrace which has now engulfed him. “I deserve this.” Showed an old clip of him denying the accusations, he said: “I look at that clip and think, look at that arrogant prick. That’s not me today.”

Shown a clip of his victory speech after winning the 2005 Tour, in which he assailed “cynics” who didn’t believe in miracles, he shook his head. “Looking at that now it looks ridiculous … I’m definitely embarrassed.”

Armstrong prompted a gasp from Winfrey when he said he had not felt like he was cheating because cheating meant to gain unfair rival over a foe, implying that all his rivals were also cheating.

Several times he made what verged on a plea for forgiveness. “These were people who believed in me, who believed me, and they have every right to feel betrayed. I’ll spend the rest of my life trying to earn back trust and apologise to people.”

He apologised to Emma O’Reilly, a team masseuse whom he sued for calling him a cheat. “She’s one of these people I have to apologise to … who got bullied, who got run over.”

Armstrong said accusers such as the journalist David Walsh and Betsy Andreu, a teammate’s wife, suffered the wrath of a “guy who expected to get everything he wanted, and to control everything”.

He said his comeback was a tactical mistake that galvanised investigations which eventually unravelled his deception. “We wouldn’t be sitting here if I didn’t come back.”