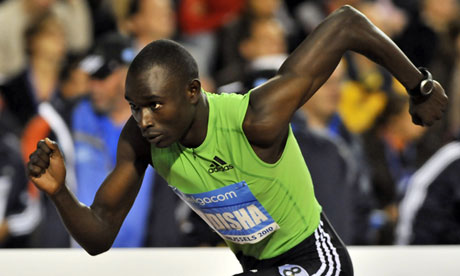 This article titled “Kenya’s David Rudisha is favourite for 800m, thanks to an Irish Brother” was written by Adharanand Finn, for The Guardian on Wednesday 8th August 2012 17.00 UTC

At 8pm on Thursday , the world’s attention will turn towards a tall Kenyan runner called David Rudisha. The 23-year-old Maasai is the 800m world champion and world record holder, and the closest thing there is to a shoo-in for a gold medal on the track at the 2012 Games.

The question on the lips of commentators at the start of the 800m final will almost certainly not be whether he will win, but by how much.

Sitting watching on a small, flickering television in his house in the town of Iten, high in Kenya’s Rift valley, will be a 63-year-old Irish Brother.

“A few of the other athletes might come and watch it with me, or I might watch it alone,” he says.

Brother Colm O’Connell first arrived in the Rift valley from Cork in 1976 on a two-year placement to teach at Iten’s Catholic boarding school, St Patrick’s. When the school’s athletics coach returned to the UK a few months later O’Connell stepped into the vacant role.

“I had no formal coaching experience,” he says. “So I just learned from the athletes.”

He was a good student. Within a few years his school teams started doing well in national competitions, and in 1986 he was asked to select the Kenyan team for the first-ever World Junior Championships in Athens.

He picked nine runners, seven from his own St Patrick’s school, and to his surprise they came home with nine medals, including four golds.

“It was then that I realised we had something special going on here,” he says.

Three years later, in 1989, he started the first running camp in Kenya. It was in the school holidays and initially it was just for girls. “I just wanted to give athletics a bit more focus,” he says.

The idea caught on, and today there are over 120 running camps in the region, housing many of the greatest distance runners on the planet.

O’Connell’s camps are still going too, and it is a considered a great honour to be invited to attend one. The coach has had an incredible success rate, with about 60% of those attending his camps going on to become international athletes â€“ among them numerous world and Olympic champions. Wherever he goes, athletes stop to talk to him and shake his hand. “He is the godfather of Kenyan running,” they say.

O’Connell first spotted 14-year-old David Rudisha in 2004, running the 200m sprint at a provincial schools race. “He only came fifth,” says O’Connell. “But I noticed he was a tall, elegant runner, and that he was focused, so I made a mental note to watch out for his progress.”

The next year he found Rudisha doing the decathlon in another schools competition. He also found out that the schoolboy’s father was Daniel Rudisha, a former 400m runner who had won a silver medal in the relay at the 1968 Olympics. O’Connell invited the young Rudisha to attend one of his training camps.

At the end of the two-week camp O’Connell told Rudisha, who was now 15, that he’d like to see him run 800m.

“He had never run an 800m before,” says O’Connell. “So I wasn’t expecting anything. Then the surprise came.”

As the runners set off around the track, with sheep grazing on the infield, O’Connell watched from the side. Running alongside Rudisha that day was the recently crowned Kenyan national schools 800m champion.

The track in Iten is made of dirt and the inside lane is worn down to a rutted channel that makes it hard to keep your footing. The track is also a few metres too long. And it sits on the edge of the Kerio escarpment, jutting out into the vast sky, at a lung-sapping altitude of about 2440 metres (8,000ft).

Rudisha crossed the line first. “He won,” says O’Connell. “He beat the national champion. And he ran 1 minute 49.6 seconds.” For those not versed in 800m times, that’s remarkably quick considering his age and the conditions. And it was his first 800m race ever.

“I didn’t make a big issue of it,” O’Connell says. “I didn’t even tell him the time.” Instead, gradually, without fuss, he shifted Rudisha over to the 800m. “The rest,” he says, “is history.”

The two men have since formed a strong bond, and the 800m runner is one of the few athletes O’Connell has continued to coach into the senior ranks.

“Sometimes you find you just gel with someone,” O’Connell tells me. “As a teenager, Rudisha made a big sacrifice to move across the country to attend a school near Iten so he could be part of our group.

“He used to come at the weekends to stay and train, and sometimes in the evenings after school. The senior athletes, Isaac Songok and Augustine Choge, used to take him off for runs into the forest. He used to love that.”

In 2010 Rudisha broke the 13-year-old world 800m record twice in one week. Then, in 2011, he won his first global title at the World Athletics Championships in Daegu.

“There are three things on a global level that you can achieve in athletics,” says O’Connell. “He has two of them. There is one missing. Winning the Olympics, he knows, will give him immortality.”

As for O’Connell, after the race he will take his usual evening stroll to the Kerio View hotel for a drink overlooking the valley in Iten. Or, as it is now more commonly known in Kenya, the Home of Champions.

Adharanand Finn is author of Running with the Kenyans, by Faber & Faber

â€¢ This article was amended on 9 August 2012. It originally referred to Brother Colm O’Connell as being a priest. This has been corrected.