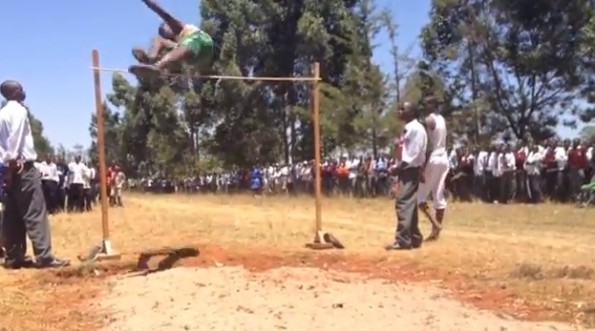 A Youtube video featuring students at a high school track meet in Rift Valley, Kenya competing in High Jump has gone viral, withÂ  700,000 views and 1,000 comments in less than a week.

The video was uploaded by a Michael Stewart and asks for well wishers to help build better facilities for the school athletes, who are seen in the video competing in high jump and landing on a bare and hard ground.

Throughout the entire history of the Olympic menâ€™s high jump competition, not one single athlete from Kenya has ever finished on the podium. Â Thatâ€™s right. Â From 1896 to 2012, 28 Olympic menâ€™s high jump competitions have taken place, and not one single Kenyan has won a medal. Â Not gold. Â Not silver. Â Not even bronze.

At the moment, you may not find that hard to believe, but you will after watching the video below, which comes to us from a high school track meet in Kenya.

I canâ€™t help but think that one of these Kenyan high schoolers may be a solid candidate to break their countryâ€™s streak of futility in the Olympic high jump competition.