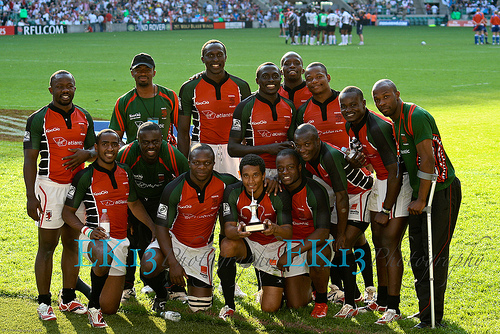 Kenya have produced one of the biggest upsets in the history of the international sevens circuit with a 19-14 semifinal win over New Zealand in Wellington tonight.

The African nation came back from 14-0 down with two second-half tries at Westpac Stadium before Oscar Ouma scored first in the sudden-death period of extra time.

Kenya will meet England in the final who made their way to the big dance by beating Samoa 21-19 in a controversial semifinal that saw some poor officiating from Australian Matt O’Brien.

In New Zealand’s final-four clash with the Kenyans, Tomasi Cama produced some of his best form as he scored an early try, while Tim Mikkelson also dotted down in the first spell.

Kenya hung tough though and fought their way back in to the game via second-half tries to Ouma and Collins Injera, with Injera’s score coming after the hooter.

Then in the early stages of the extra period Ouma broke free to dot down and send New Zealand out of the tournament.

England were an unlikely side to make the final given their form in the previous three tournaments this year has been weak but they’ve been galvanised by the return of try-scoring machine Mat Turner.

New Zealand have had to make do without wing Kurt Baker today who has been sidelined by a hamstring injury but Hawke’s Bay’s Gillies Kaka has filled in well.