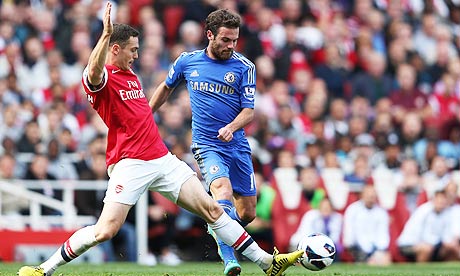 BY: Amy Lawrence at the Emirates Stadium for The Observer, Saturday 29 September 2012 14.53 BST

In the blue corner, Chelsea‘s band of supporters needed no invitation to offer a reminder of who is London’s top dog in terms of the European Cup. On the pitch, their players made the point that they are serious about re-asserting themselves in the Premier League. They are certainly well placed to make a big improvement on last season’s sixth place.

In inflicting Arsenal‘s first defeat of the season, Chelsea consolidated their position as Premier League pacesetters. They were helped along the way by some slack defending, for whom Laurent Koscielny started at the expense of the previously ever-present, and consistently calm, Per Mertesacker. Two set pieces from the assured boot of Juan Mata did the damage. Fernando Torres dispatched the first with cunning. Koscielny helped the second on its way. It was enough. Chelsea looked like they had a gear in reserve.

Arsenal did not pose enough threat to claw their way back from two crucially loose moments. Indeed, they were flat enough to ensure the home support did not even rouse much sustained hostility for John Terry, who had a untroubled 90 minutes. The pantomime booing petered out once Chelsea took the lead.

Arsenal had been frustrated by their weakness at a set piece to give Manchester City the lead last Sunday. There was not much tangible improvement here. “We gave away two soft set pieces and we were punished,” said ArsÃ¨ne Wenger, who was very agitated as his team were outmanoeuvred at both ends of the pitch. “The difference between us and Chelsea in the air was obvious.” There may have been improvements this season, but a familar problem came back to haunt them at an untimely moment.

Chelsea’s first decisive free-kick exposed how Arsenal still have issues to iron out concerning their organisation when facing dead balls. Mata’s delivery arced towards the far post, over a leap from an unmarked David Luiz, and Torres got the better of Koscielny to supply a clever, instinctive finish. He wrapped his leg around the defender to clip a volley past Vito Mannone.

Torres ought to have given Chelsea an even more emphatic advantage moments later when he ghosted behind the dawdling Koscielny and bore down on Mannone’s goal. A 2-0 scoreline felt inevitable, only for the Spaniard to kick thin air instead of the ball. A let off for Arsenal. There were other scares before half-time as the inventive Oscar and Eden Hazard crafted chances, while Torres grazed the side-netting.

Chelsea were relaxed, barely stretched as Arsenal strained to build momentum in their passing. They were not helped by an injury to Abou Diaby, who limped off in the 16th minute, which disrupted the pattern Arsenal have estabished in midfield this season. The Frenchman damaged a muscle in his thigh, which Wenger assessed will keep him out for three weeks. Home frustrations were evident when Thomas Vermaelen lumped in a hopeful shot from 40 yards out. Roberto Di Matteo noted how his newly styled midfield worked well to snuff Arsenal out. “We didn’t allow Arsenal to get into any rhythm,” he said.

They did keep plugging away, though, and were rewarded when Gervinho â€“ hitherto giving a fairly ineffective impression of a false nine â€“ took a deft touch to swivel on to Alex Oxlade-Chamberlain’s pass and drill the equaliser high into Petr Cech’s net.

Chelsea’s determination was palpable. They emerged after half-time keen to make the most of the combination of their three tricksters â€“ Mata, Oscar and Hazard â€“ floating behind the runs of Torres. It was not so pleasing on the eye, though, to see David Luiz trying to win a penalty with an act of blatant simulation, for which he was booked. “He went down, but I don’t think he appealed for anything,” said Di Matteo. “I’m against diving. It’s not something I encourage.”

Lukas Podolski needed to get more involved and his driving run opened up Chelsea, only for Santi Cazorla to slice his effort wide.

Chelsea eased back in front with another set piece that left Arsenal cursing. Mata’s delivery was again excellent, but Koscienly’s miserable afternoon worsened when the ball skimmed his shin and past Mannone at the far post.

Di Matteo was enthused to see Mata back at his influential best. “The break we gave him did him good,” he explained. “He played at the Euros and went straight to the Olympic Games. If we didn’t give him a break, it could have had an effect.”

Arsenal mustered a handful of attempts to rescue a point. Podolski’s goalbound header was clawed out by Cech. Kieran Gibbs’s dangerous cross was diverted by David Luiz. Wenger sent on Olivier Giroud and Theo Walcott, and although Giroud had three moments to seize the day, his Premier League pressures persisted. The Frenchman tested Cech with his first attempt, struck the crossbar (although the linesman had raised a flag) and, in stoppage time, he dinked past Cech only to angle his shot against the side-netting. “It was a top chance,” said Wenger.

Chelsea may be changing, but Cech again proved his worth. “We have had a great start to the Premier League,” Di Matteo said. “Hopefully we can be there at the end.”