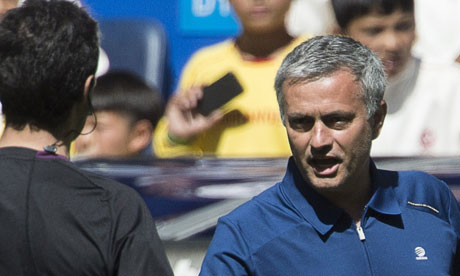 Chelsea have confirmed the appointment of JosÃ© Mourinho as manager for the second time, on a four-year contract.

The 50-year-old Portuguese coach travelled to London to complete the formalities of a return to Stamford Bridge after his exit from Real Madrid was confirmed. Mourinho managed Chelsea between 2004 and 2007, leading the west London club to successive Premier League titles in 2005 and 2006.

Mourinho succeeds interim manager Rafael BenÃ­tez, who had replaced Champions League-winning coach Roberto Di Matteo in November 2012 and, following some initial difficulties, went on to guide the Blues to a third-place finish as well as winning the Europa League.

“I am delighted to welcome JosÃ© back to Chelsea. His continued success, drive and ambition made him the outstanding candidate,” said Chelsea chief executive Ron Gourlay.

“It is our aim to keep the club moving forward to achieve greater success in the future and JosÃ© is our No1 choice as we believe he is the right manager to do just that. He was and remains a hugely popular figure at the club and everyone here looks forward to working with him again.”

Coaches Rui Faria, Silvino Louro and JosÃ© Morais will also head to Stamford Bridge, with Mourinho officially unveiled by the club next Monday.