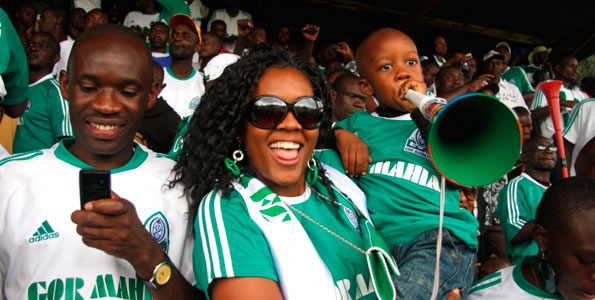 Gor Mahia fans have in the recent past faced coordinated attacks by an alleged ‘gang’ operating in Nairobi. K’ogallo followers, arguably the backbone of the soccer industry in Kenya, have seen their safety compromised by ugly incidents where its members wearing the green jersey are accosted unknowingly by people believed to be working under a political figure in Nairobi.

The worrying trend is being sanitised by the police who claim the fans are themselves very rowdy and break into peoples businesses whenever their is a match in Nairobi- a charge which the club’s officials vehemently deny, claiming security of peoples businesses and safety cannot be part of K’ogalo fans work, but the very reason why the police system exists in a country.

According to the police, it is the fans that are ‘notorious’ thus many city dwellers panic whenever there is a match in town. They allege they have recorded several occurrences where frenzied Gor fans attacked motorists after matches at Nyayo or City stadiums.

K’ogalo fans allege that the gang is now attacking anyone wearing the club’s conspicuous green jersey. Recently, a police officer who is a fan of the club was attacked in the company of a friend with whom they had just left watching a game. His friend was not touched.

â€œI was wearing the Gor jersey when five men confronted me, my colleague, who was not in Gor uniform was not harmed,â€ said the officer, who is recovering from stab wounds inflicted in March.

Confronted by this reality, the police service still blamed the club’s fans who are now saying the attack targets them because of their perceived political leaning.

“People think everyone in the green jersey is a CORD or Raila supporter; but Gor is more than that; we have worked hard to make this club a lifestyle for everyone,” said a fan.

Another fan blamed the attacks on Maina Kamanda whom he says is creating a wedge between poor kikuyus and luos who have co-existed peacefully in Nairobi.

“Not every kikuyu in this city is rich, just as Luos, but Kamanda is hell-bent in causing a rift just to appear he is protecting the interests of Kikuyus,” said a resident of Kwa Njenga slums.

Another incident occurred around Muthurwa market (heavily dominated by hawkers) where the traders attempted to stone K’ogalo fans singing and dancing towards the city. They however withdrew after the fans teased them ‘who will lose Mitumba cloths, us or you’.

Gor Mahia Secretary General George Bwana blames the police on the woes facing the club’s followers, claiming they are ‘shifting blame over their failures’.

â€œIt is very simple, police must provide security. If people are breaking the law, they must be arrested and prosecuted, it is not the duty of the club,â€ he stressed.