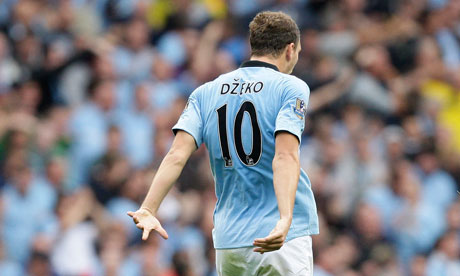 Is Edin Dzeko off to Arsenal? Maybe. Stranger things, like Gervinho playing well, have happened

The Mill has never been one for those awkward bars where over-sozzled men in contrast collar and cuffs shove notes into the impossibly skimpy underwear of girls the same age as their daughters at home. But as an all-singing, all-dancing, rarely truthful transfer turbine that is forced to perform its sordid dance to the transfer gods each and every morning, the Mill can consign its two left feet into the Christian Louboutin’s of those girls and find them a reasonably snug fit.

The same must go for footballers up and down the land right about now. There is less time to the close of the transfer window than that afforded to Eddie Murphy and Nick Nolte and if players want their move, poles will have to be climbed, smouldering looks will have to be shot and seductive rugs will have to be cut, pronto. And with that bromidic, banal analogy out of the way, let’s get down to the business of the day.

The greatest trick Theo Walcott ever pulled was convincing the world that he is a footballer. Week in, week out, year in, year out, Theeee-O! Theeee-O! would dash, scamper and scuttle up and down various sidelines throughout the land â€“ often even touching the ball â€“ fooling fans, managers, casual observers, not-so casual observers and the Swiss Guard into thinking that he knows what he is doing, when in actual fact Theeee-O! Theeee-O! appears to know about as much about football as the Mill knows about post-structuralism, paradigmatic analysis and the work of Algirdas Julien Greimas. Nevertheless, that hasn’t stopped Liverpool â€“ who, in fairness to them, know a thing or two about buying duff midfielders â€“ from slapping some dead presidents on ArsÃ¨ne Wenger’s almost broken table in return for Theeee-O! Theeee-O! But fear not Arsenal fans, that deal will only be getting the green light if Liverpool can get rid of Andy Carroll and we all know that ain’t going to be happening no way, no how.

There is more Arsenal news. After last week’s antidote for insomnia performance against Stoke that was more blunt than a cigar stuffed with something the 42nd president of the United States would never inhale, the normally miserly Wenger has gone all wanton on the world. Not content with some chap who scored a few goals against teams like European superpower Evian and another who could not even hit the largest barn door built by the finest Amish craftsmen in Lancaster County, Pennsylvania, despite standing two feet away, Wenger is about to get out his wallet and write a cheque for Â£18m of the biggest ones. In return for that cheque he will be getting Edin Dzeko, whose time at Manchester City has been such an unqualified success that the Mill is not sure why Roberto Mancini has not stopped giggling since Wenger sent his offer via telephonic transmission of some scanned printed materials.

Elsewhere, Mill favourite Dimitar Berbatov is caught in something of a bizarre love triangle. Having being given the sharp end of Sir Alex Ferguson’s rather pointed elbows, it seems the Bulgarian is now being beckoned into the comforting embrace not only of Fiorentina but of Juventus and Fulham too. However, Berbatov is not the type of striker who will just throw himself into the expanded arms of the first club that offers him Â£80,000 a week and a truck load of sweet Carolina tasting Laramies. Oh no. He will need more than that and while the Mill does not know what that is, his former boss, Martin Jol, does. Thus, you will find Berbs sitting outside west London’s finest cafes reading Camus soon enough.

If you are not interested in that final paragraph where the Mill crowbars in all the other transfer news it could not be bothered to have fun with in the previous ones, look away now. Queens Park Rangers are set to make signing No901 and No902 of the transfer window as Mark Hughes does his best to shake off the tag that he is not the type of manager that needs to spend big in order to bring any semblance of success to a club; No903 is Esteban Granero while No904 is StÃ©phane M’Bia. Paul Lambert will solve all of Aston Villa‘s problems by splashing out on Â£2m on Ryan Babel, who is also wanted by Swansea for reasons the Mill will never, ever understand. Nicklas Bendtner has still not moved to Milan and the same goes for LoÃ¯c RÃ©my and Tottenham. And finally, Charlie Adam will be making his slow, slow way out of Liverpool with nobody really interested in where he is going except Tony Pulis.