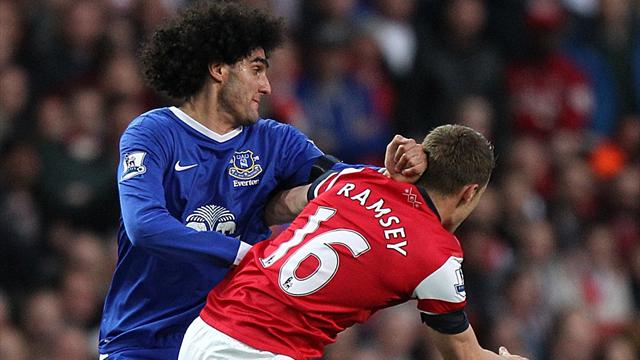 The biggest loser of the English Premier league this weekend from a casual look has to be Manchester United. A small team sauntered into their Old Trafford turf and robbed them of their three points. Chelsea also lost but it was not as painful though painful nonetheless.

Most teams make their homes their fortresses and there is nothing embarrassing about losing at away from home with your opponents’ crowd and everything else in their favour. I always find some positive in every adversity. At Stoke, the positive thing we took away are the two goals scored. Chelsea scores goals! It also exposed our defence and I believe that some great defender will arrive in the January transfer window to stabilize our back line.

As soon as the results came out yesterday, the match between Arsenal and Everton became highly anticipated. Arsenal were looking to take advantage of the slip up by their nearest challengers to extend their leadership at the top by some comfortable seven points. Well, the results are out!

Everton is a small dog with a big fight in them. They tormented Arsenal and largely dominated a team that prides itself in ball possession. The battering continued into the second half and it was a sigh of relief for Arsenal fans when Mesut Ozil scored from a pass that came from an offside possession in the 80 minute.

Howard Webb is an experienced referee but he seemed to be taking cue from the partisan crowd at the Emirates Stadium. However, Arsenal will have to thank Romelu Lukaku for his atrocious wastage of one gilt edged chance after another. Comparisons have been made between him and Drogba. He might live up to that comparison some day but for now, he has to work harder to even come close to Drogba.

When you analyze the results of the weekend more critically and especially with the next matches in mind, you cannot escape the conclusion that by drawing Everton at the Emirates, Arsenal is the biggest loser of the weekend. Forget about Man U momentarily, they are out of the title race.

Arsenal should have won what should easily pass as the easiest match in the next three fixtures. Of course even their die hard fans don’t expect them to beat City. That reduces their lead to two points. On twenty third, Chelsea celebrates an early chrismas with a victory at the Emirates to virtually wipe out Arsenal’s lead.

We’ve got the last word!