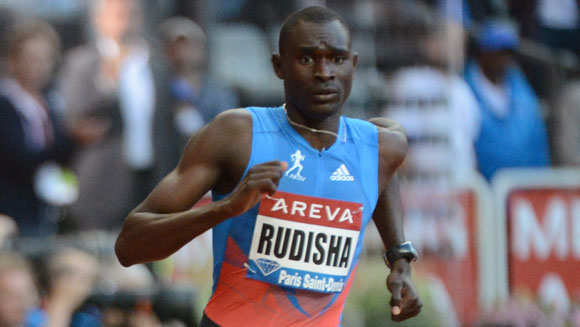 They say David Rudisha is ‘the greatest runner you’ve never heard of’. That is the line that has been rolled out by the headline writers at the BBC, Vanity Fair and a few others in recent weeks. You know him now. Rudisha, the greatest 800m runner in history, broke his own world record at the Olympic Stadium on Thursday night. He became the first man in history to run two laps of the track in under 1min 41sec, finishing in 1:40.91.

For a lap and a half, the 80,000 crowd, already giddy with anticipation of seeing Usain Bolt race Yohan Blake in the 200m final later that night, seemed to have been silenced, as through they were stunned by what Rudisha was doing. He led the race from the first bend to the finish line, running a series of split times that defied both belief and sense â€“ 23.30sec for 200m, 49.28sec for 400m, 1min 14.30sec for 600m. On and on he went, his long. muscular stride carrying him smoothly along the track. Finally, as he kicked again around the final bend, it became clear that this was really happening, and the 80,000 erupted into life.

If you did not know Rudisha, it is only because he keeps such a low profile. There were no histrionics on the startline, and no exuberant celebrations at the finish. The only difference was that his smile was a little bigger at one end than it had been at the other. “I am very happy,” he said after he had completed a lap of honour together with his Kenyan teammate Timothy Kitum, who took bronze. “I’ve waited for this moment for a very long time. To come here and get a world record is unbelievable. I had no doubt about winning. Today the weather was beautiful â€“ I decided to go for it.” Indeed it was. Outside the sun was setting, turning the sky a colour that must have been familiar to Rudisha, a twilight shade that he grew up with each night in Iten, up in the Rift Valley. It was a glorious day, falling towards the end of a wonderful Games, and it helped inspire him to produce one of the defining moments of the 2012 Olympics.

Rudisha pulled the field around behind him, like a speedboat leading seven water-skiers. Great Britain’s Andrew Osagie came eighth, in 1min 43.77sec. No one has ever run faster to finish last in an 800m final. His was one of seven personal bests set in the race, along with two national records. The odd man out was Rudisha’s great rival Abubaker Kaki, who has to settle for a season’s best. Even that only got him seventh place. We say rival. In truth there is no one out there who can catch Rudisha. He has lost just one race in his last 46.

The pace was so ferocious that the silver medallist, the 18-year-old Nijel Amos from Botswana, had to be carried from the track in a stretcher. He went off waving cheerily to the crowd, having become only the fifth man in history to run under 1min 42sec. Rudisha has now done that eight times. Which is why all three members of Great Britain’s 1980s middle-distance trinity had hailed him as the greatest coming into these Olympics. “He is the outstanding 800m runner of his generation,” said Seb Coe, “And I will say it, probably on paper the most impressive track and field athlete at these games.” It must be one of the few things he and Steve Ovett agree on. “A gold medal for Rudisha is a foregone conclusion,” Ovett has written. “Unless he takes a tumble or is hit by a falling meteorite.” Steve Cram added that Rudisha is “unbelievably talented. It is the way he runs, nobody can do what he does.”

The first thing Rudisha will want to do with his gold is get it home and show it to his father. For the last 23 years, after all, he has been looking at the silver medal that Daniel Rudisha won in the 4x400m relay at the 1968 Games. “It would be good for me to win gold, so we can have gold and silver in our family,” Rudisha said before competing here, “so I can tell him ‘I am better than you.'” He chuckled softly at the thought. Rudisha may be the greatest 800m in history, but even champions have to put up with grumpy dads. “We are always talking about sport, and he is always complaining that in his day they didn’t have good tracks, good training facilities, and he himself didn’t have a coach. So he is always saying ‘you guys have it better, so work hard and do better than us.'” The old curmudgeon might have to admit that his boy did pretty well here.

Rudisha is a member of the Masaai tribe. When he first broke the world record, in 2010, he was flown back to his old hometown of Kilgoris, the guest of honour at a grand feast of 5,000 people and, they say, 1,000 bulls. They will have to start rounding up the livestock now if they want to top that. That was only five years after Rudisha first took up the event. He was once a sprinter, but was spotted by Brother Colm O’Connell, an Irishman who still works as the athletics coach at St Patrick’s High in Iten. “My father’s encouragement is what has brought me this far,” Rudisha says. “Because when I grew up I wanted to be like him, and I knew I had that ability to become an athlete. Being an Olympian is one of the greatest things, and being an Olympic gold medallist is one of the most prestigious titles in the world.”