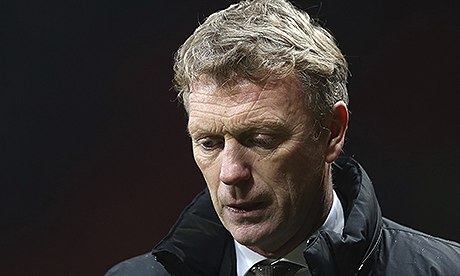 ‘It cannot just be presumed the Glazers are these avuncular types who will tolerate the indignities of the last six months persisting.’ Photograph: Matthew Peters/Man Utd via Getty Images
By Daniel Taylor forÂ  The Guardian, Monday 6 January 2014 16.00 GMT

If we are at the stage when he needs a few small mercies, at least David Moyes has been spared those times when there was never any shortage of ex-Manchester United players jostling in the queue to be the first to stick the boot in. George Best once said he would not “walk round the corner to see United” and recommended they brought in Terry Venables during the troublesome early parts of Alex Ferguson’s 26 years in charge. Tommy Docherty went even further, provoking one of Ferguson’s classic putdowns. “We all know about the Doc,” the manager wrote in 6 Years At United. “He is what he is, a bitter old man.”

Moyes has devoured every page of Ferguson’s latest autobiography but it is that lesser-known 1992 book that should really be essential reading for a man in his position. Six months into his new job, Moyes would no doubt understand the awe in Ferguson’s words when he wrote of his first experiences at Old Trafford and that “no manager can really be prepared â€¦ it’s so different from any other club in Britain.”

Yet it is a passage from the same chapter, The Legend, that really sticks out at a time when Moyes is straying dangerously close to the point of crisis. “Only through success can a manager become master of his own destiny,” Ferguson wrote. “Success unlocks all the doors. Set against a background of two or three trophies, decisions can be made with a ring of conviction, players accept what you are saying without doubting, supporters sustain their belief through the inevitable setbacks and you become a figure of authority without the need to look over your shoulder. Success achieves all these things as well as giving a manager security at home, knowing his job is safe.”

The evidence is there at Chelsea, where JosÃ© Mourinho‘s gravitas, strength of personality and record of achievement means there can be erratic results and the ostracism of a crowd favourite, Juan Mata, without even the beginnings of any real discord from the club’s followers.

Perhaps in hindsight â€“ though they would never admit it â€“ there are people in high positions at Old Trafford, or at the Glazer residence in Florida, wondering now whether it was actually so wise making Moyes the recipient of the “Chosen One” banner that hangs inside the stadium, rather than the manager who was available from Real Madrid with two European Cups to his credit, along with league titles in four different countries.

Mourinho, with enough individual awards to fill a removals van, brings any employer a near-guarantee of success. Moyes, with no silverware, Champions League record or background in high-end football, should probably just be grateful that United do not operate by the same cut-throat tendencies as their peers. Any other top European club that had fallen away from champions to seventh, playing prosaic, laboured football at a time when their major rivals were all on an upward trajectory â€“ well, it is just a fact of modern football life the manager would probably have been fired already, with his belongings sent in the post.

If that sounds at all alarmist, maybe it should be reiterated that it is possible to admire a manager, especially one with Moyes’s dedication to his sport, but also wonder whether they are properly equipped for their current employment.

It is also worth mentioning two other things about United’s current predicament, both relating to the Glazer family. The first is that a poultry farm’s worth of chickens are coming home to roost given the way the Glazers have got away with doing virtually the least amount possible, year on year, to help the team, on the basis Ferguson’s management strengths would always compensate. The second â€“ and this cannot be overstated â€“ is that the club’s owners gave Moyes a six-year contract. A deal of that length is a statement in itself and it is an almighty leap of logic to assume they would even contemplate breaking it early.

Equally, it cannot just be presumed the Glazers are these avuncular types who will tolerate the indignities of the last six months persisting. True, there was the 5-0 win at Bayer Leverkusen in the Champions League, but the general level of performance has been undistinguished enough to make that night feel almost like a deception. It stands out like an exotic flower in a field of weeds when a generation or two of United fans is experiencing, for the first time, what it is like to witness a team that is vulnerable every single week.

From December, it has incorporated Everton’s first league win at Old Trafford since 1992, Newcastle’s first since 1972, another defeat at home to Tottenham and now that moment in the FA Cup on Sunday when Wilfried Bony’s late, decisive header for Swansea City felt shocking, yet not actually a real shock. Swansea had never won at Old Trafford before in 10 previous attempts going back to 1931. None of us has ever known an FA Cup in which Crawley, Burton Albion, Rochdale, Macclesfield, Stevenage and Kidderminster have outlasted United. Of course the Glazers are going to be jumpy. How could they not?

There is further mitigation going into the first leg of their Capital One Cup semi-final at Sunderland on Tuesday night, not least Robin van Persie’s injury issues, and it would be unfair not to recognise the way Moyes has calmed the Wayne Rooney situation when Ferguson’s selfish desire to win that personal feud had left his successor with his first major issue before he had even memorised everyone’s names.

Moyes’s sympathisers will return to the fact it took Ferguson three and a half years before he accumulated the first of his 39 different trophies for the club. Yet it is a flimsy line of argument. Ferguson inherited a team that was fourth from bottom, 19 years since United’s last championship, and with a group of players who habitually turned up for training still half-cut from the night before.

Equally, Gordon Strachan was slightly missing the point in his television analysis when he placed the emphasis on Moyes having to show that a British manager could work at the highest level. A club with United’s ambitions â€“ the bus that waits for nobody, Ferguson used to say â€“ have more important things with which to concern themselves than nationality.

The mind goes back to Ferguson’s farewell speech, on the pitch at Old Trafford last May, and his final request. “I’d like to remind you that when I had bad times here the club stood by me,” Ferguson said that day. “All my staff stood by me, the players stood by me, you stood by me, and your job now is to stand by our new manager. That is important.”

For the most part, they have done just that. The absence of voluble mutiny, however, is not necessarily a collective belief that Moyes will get it right. The tie at Sunderland has suddenly taken on new importance, with the three-handed pot once nicknamed the Worthless Cup under another sponsor now being United’s best chance of a trophy. On Saturday, Swansea return to Old Trafford in the league. The following weekend it is a trip to Chelsea and another examination of whether United were right to let Ferguson handpick his own successor. Everton’s improvement since Moyes left, looking down on his current team, merely compounds the lingering sense that the chosen one was possibly the wrong choice.