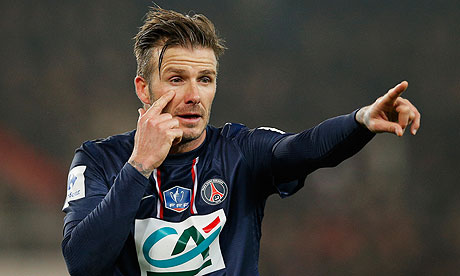 David Beckham is to retire from football after two decades at the top of the game. Beckham was initially thought to be contemplating a further year’s contract at Paris Saint-Germain, where he has just won a league title in a fourth country following spells at Manchester United, Real Madrid and the LA Galaxy in MLS.

However, the PSG coach who brought him to the club, Carlo Ancelotti, is likely to depart for Real Madrid as JosÃ© Mourinho’s replacement and at 38, Beckham has concluded that another year of intense competition might be a step too far.

“I’m thankful to PSG for giving me the opportunity to continue but I feel now is the right time to finish my career, playing at the highest level,” he said.

On the international stage, Beckham holds the England record for making 115 appearances as an outfield player for the national team.

He is expected now to return to London with his wife Victoria and children, Brooklyn, Romeo, Cruz and Harper. His fortune is said to be worth around Â£165m and there have previously been suggestions that he would like to invest in an MLS club and pursue his coaching schemes for schoolchildren.

After making his debut in 1992, Beckham won six titles with United, scoring 62 goals in 265 Premiership matches. He was a member in the historic treble team, adding the Champions League and two FA Cups to his list of honours.

“If you had told me as a young boy I would have played for and won trophies with my boyhood club Manchester United, proudly captained and played for my country over one hundred times and lined up for some of the biggest clubs in the world, I would have told you it was a fantasy. I’m fortunate to have realised those dreams,” he said.

“To this day, one of my proudest achievements is captaining my country. I knew every time I wore the Three Lions shirt, I was not only following in a long line of great players, I was also representing every fan that cared passionately about their country. I’m honoured to represent England both on and off the pitch,” said Beckham.

His subsequent career took in Real, Milan, LA Galaxy and PSG. He won the La Liga title in his final season in Spain, the MLS Championship twice and most recently the French Ligue 1 Championship.

Beckham added in a statement: “I wouldn’t have achieved what I have done today without my family. I’m grateful for my parents’ sacrifice, which made me realise my dreams. I owe everything to Victoria and the kids, who have given me the inspiration and support to play at the highest level for such a long period.

“I want to thank all my team-mates, the great managers that I had the pleasure of learning from. I also want to thank the fans who have all supported me and given me the strength to succeed.”

He continued: “Nothing will ever completely replace playing the game I love. However, I feel like I’m starting a new adventure and I’m genuinely excited about what lies ahead. I’m fortunate to have been given many opportunities throughout my career and now I feel it’s my time to give back.”

He has two final games before the end of the season, the last home match of his career this Saturday coming against Brest at Parc des Princes.