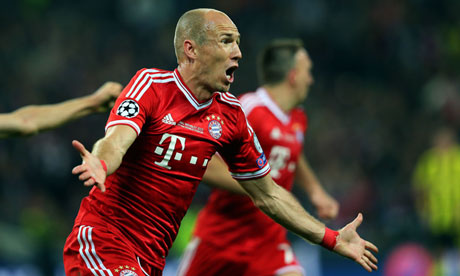 It was a night of outstanding drama, fully reaffirming everything that has been said and written about the illuminating standards of German football, and when it was all done Bayern Munich had moved alongside Liverpool with their fifth European Cup and the Borussia Dortmund players were on their knees.

JÃ¼rgen Klopp’s players had been quick to the ball, strong in the tackle, and utterly determined to show they should not feel inferior in any sense.

Yet this is some Bayern team and the Bundesliga champions had been the more dangerous side when the goals arrived in the second half, culminating in that moment after 89 minutes when Arjen Robben ran on to Franck RibÃ©ry’s half-blocked back-heel and clipped in the late, decisive winner.

They had taken the lead just before the hour when Robben set up Mario Mandzukic but Dortmund, so dignified in defeat, will probably always wonder what might have happened if Dante had been sent off for the challenge that gave Ilkay Gundogan the chance to equalise from the penalty spot.

Dortmund began the game in a way that made it feel like a trick of the imagination these sides were separated by 25 points in the Bundesliga.

Bayern were not exactly pinned back during the opening 20 minutes but it was a close-run thing at times. Jakub Blaszczykowski really ought to have put them ahead with the chance that came his way from Marco Reus’s cross after a quarter of an hour. Manuel Neuer had already tipped a long-range effort from Robert Lewandowski over the bar by that point and, soon afterwards, Klopp could be seen punching the air with satisfaction after a lovely piece of skill from Kevin Grosskreutz had sent Reus scampering through the inside-left channel.

At that stage, Neuer was far busier than the hordes of Bavarians behind his goal might have anticipated. Bayern certainly took their time to get going and there was a measure of frustration attached to the flailing arm with which RibÃ©ry caught Lewandowski on the chin.

Yet Dortmund could not turn their early superiority into the hard currency of goals and, gradually, the momentum started to swing. Neuer, demonstrating why so many people regard him as the outstanding goalkeeper in Europe, had to be quick off his line again to keep out Lewandowski.

Suddenly, however, it was Bayern piling up the better chances. The most inviting of them fell to Robben in the 28th minute, finding a gap in defence that should not have been there and running clear on goal. His first touch was good enough, steadying himself for the shot, but Roman Weidenfeller had shown great anticipation of the danger, sprinting off his goal-line and charging down the Dutchman’s effort.

A couple of minutes earlier, Dortmund’s goalkeeper had arched his back to tip Mario Mandzukic’s header on to the crossbar. From the resulting corner, Javi MartÃ­nez flashed another header wide and now there was the clear sense of Heynckes’s men asserting their authority.

Their problem was the same as Dortmund’s: they were facing a goalkeeper playing at the top of his game. Weidenfeller was superb in that spell of Bayern pressure before half-time, alert to every danger, exposed too often but always able to get a part of his body in the way. When his gloves could not reach the ball, he improvised and got lucky as Robben’s shot struck him on the jaw. Yet Weidenfeller had deserved that bit of luck for recognising Mats Hummels was slightly out of position and making sure he was in the right place, quick off his line again, to narrow the angle and make the shot as difficult as possible. The first half had flowed nicely, initially with Dortmund in control, then Bayern having a turn, with sporadic bursts of attacking football from both sides. More than anything, it had been a demonstration of brilliant goalkeeping.

The opening goal originated on the left, Robben wandering over from his starting position on the right to double up with RibÃ©ry. As RibÃ©ry ran at a clutch of defenders, Mandzukic would have been offside if the cross had reached him directly. Instead, RibÃ©ry clipped the ball into Robben’s path, darting behind the line of defenders. Weidenfeller was forced to leave his line again and that left the goal exposed as Robben went to the goalkeeper’s left and turned the ball across the six-yard area. From a yard out, Mandzukic could hardly miss.

This was the point at which a game that had been smouldering away fully ignited. Dante, already booked, should really have been sent off for the carelessly high, studs-up challenge on Reus that gave Dortmund their chance to equalise. From Bayern’s perspective, it was a terribly soft way for the game to be levelled but it could have been even worse if the Italian referee, Nicola Rizzoli, had given it the correct punishment. As it was, Gundogan’s penalty was expertly placed to Neuer’s left.

The drama was almost unremitting from that point onwards, not least the outstanding moment being Neven Subotic’s astonishing goal-line clearance to deny Thomas MÃ¼ller closing in behind him and, with Bayern on top, Weidenfeller had to keep out left-foot efforts from David Alaba and Bastian Schweinsteiger. Yet Robben had the final say and Bayern were reunited with the trophy they cherish the most.