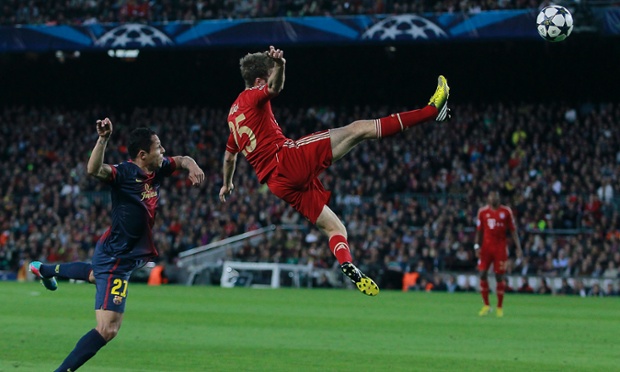 “MissiÃ³ Possible“, Catalan television had been calling it. That, however, was before the news filtered through that Lionel Messi was not fit enough to play. From a bad start, the night then just got worse for Barcelona.

Bayern were simply too refined, too strong and too expertly assembled and, over the two legs, an aggregate victory of 7-0 does not flatter them in the slightest.

Their place in the final, confirming an all-German event at Wembley on 25 May, was probably assured from the moment the team-sheets were handed in, bearing in mind what has become so apparent over the last few weeks: that Barcelona without Messi can resemble an expensive toy without batteries. Even so, there was something fairly remarkable about the way Bayern comprehensively set about from where they had left off in the first leg.

Barcelona’s ordeal was confirmed from the moment Arjen Robben opened the scoring three minutes into the second half and what followed, first Gerard PiquÃ©’s own goal and then Thomas MÃ¼ller’s header, made it another chastening experience.

Before the end Camp Nou, the scene of so many great BarÃ§a triumphs, had to suffer the ignominy of hearing Bayern’s supporters greeting every touch with jubilant cries of “olÃ©“.

The Bundesliga champions had outclassed the most revered club side of the past 10 years and they managed to do so without any of the six players who began the night a booking away from missing the final being ruled out. It was the first time Barcelona have lost both legs of a Champions League tie and it means Bayern now have the chance to add to their four European Cup wins. Jupp Heynckes’s side will have to be considered the favourites bearing in mind the 20-point gap they have established over Borussia Dortmund en route to winning the title.

Barcelona will reflect on what happened in the Allianz Arena and that moment, in the first leg of the quarter-final against Paris St-Germain, when Messi felt that sharp, tell-tale pain at the back of a leg. His absence, still feeling the effects of his hamstring injury, was a grievous setback but PiquÃ© made the point afterwards that Bayern were so superior it might not have made any great difference.

This was a team that was also missing Sergio Busquets, Javier Mascherano and Carles Puyol and experimenting with a new-look defence that had Adriano deputising for the suspended Jordi Alba at left-back and Marc Bartra, usually a fifth-choice centre-half, alongside PiquÃ©. Bayern subsequently felt emboldened enough to play with great adventure and attacking purpose and, in the process, they ensured there was never really a point when it was possible to detect any genuine belief inside the stadium.

On the contrary, it was one of the quietest 95,000-plus crowds it is possible to imagine. A good number stayed behind to applaud the Bayern players. Even more headed for the exits as soon as MÃ¼ller had connected with Franck Ribery’s cross to make it 3-0.

By that stage Tito Vilanova had taken off Xavi HernÃ¡ndez and AndrÃ©s Iniesta. It seemed like the equivalent of planting a white flag in the centre circle and, after that, it was probably no surprise they finished the match looking so dishevelled. PiquÃ© reflected on it being the worst night of his BarÃ§a career and will no doubt be embarrassed by the nadir, after 72 minutes, when Ribery crossed from the left and the defender’s attempt to clear the danger resulted in an ugly shank into his own net.

The truth, however, is that Barcelona were already beaten at that point and had accepted as much. There was never going to be any way back once Robben controlled David Alaba’s cross-field pass, cut inside Adriano and let fly with his left boot.

Barcelona had put together some pockets of concerted pressure in the first half, with Xavi and Iniesta pushing forward to support David Villa, Cesc FÃ¡bregas and Pedro RodrÃ­guez. Bayern, though, were always the more dangerous side, breaking with more purpose and fluency.

Barcelona’s elaborate, triangular passing patterns are all very pleasing on the eye. Too often, though, they were playing in midfield areas where their opponents could not be hurt. The first half simply fizzled out and when they conceded the first goal, meaning they would need six, Vilanova’s substitutions told their own story.

It is rare to see BarÃ§a so short of ideas but Bayern, with Bastian Schweinsteiger, Javi MartÃ­nez and MÃ¼ller outstanding in central midfield, and two wide players in Ribery and Robben of genuine menace and penetration, have made a habit of demoralising opponents this season.

Barcelona â€“ mighty Barcelona â€“ had been made to look ordinary and the Bundesliga has its first Champions League winner since 2001.