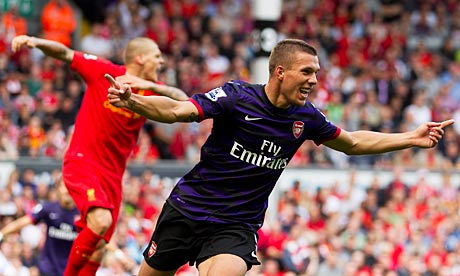 The taunt was inevitable but no less cutting for it as Arsenal added to Brendan Rodgers’ problems at Liverpool with a commanding first win of the season. “Andy Carroll, he would have scored that,” the away end sang as Jonjo Shelvey sliced a late chance wide. Maybe so, but defeat for Liverpool was not borne of the transfer market but superior opposition and another mistake from the once formidable JosÃ© Reina.

To increase the torment at Anfield, the summer signings Lukas Podolski and Santi Cazorla scored Arsenal’s first league goals of the season while Theo Walcott, a player Rodgers had hoped to sign and may make a renewed attempt for in January, sat on the bench throughout.

Liverpool had their moments, including three penalty claims turned down by the referee, Howard Webb, but could have no complaints over their second league defeat of the campaign. Fabio Borini put shots high and wide, Daniel Agger should have done better with a free header from a Steven Gerrard corner and Raheem Sterling spun and shot against the outside of the post after a knockdown from the Liverpool captain.

Gerrard’s attempt at a first-time pass to Luis SuÃ¡rez deep into Arsenal territory was to have damaging consequences, however. Podolski intercepted and played a good ball through to Cazorla before sprinting half the length of the pitch for the return. Cazorla, calmness and awareness personified, delivered the return Podolski’s effort deserved and the German international buried Arsenal’s first league goal of the season under Reina into the far corner of the Kop goal.

Liverpool appealed loud but in vain for second half penalties when Per Mertesacker wrestled with SuÃ¡rez and the ball hit Thomas Vermaelen’s arm but rarely threatened a recovery. Cazorla compounded a bad week for Liverpool and Reina â€“ guilty of another bad error against Hearts in midweek â€“ when he exchanged passes with Podolski and tried his luck with a shot hard and low. The ball flew under Reina’s grasp and in.