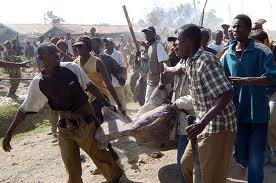 Like many Kenyans, Eko Dydda’s tribal origins used to be obvious from his name. But after witnessing the ethnic violence that followed the country’s last election, the gospel rapper decided to change his name to remove any reference to his tribe.

The 26-year-old, who was named best male artist at Kenya’s 2012 Groove awards, says many young Kenyans support his battle against tribalism. He warns that time is running out ahead of the country’s next election in March.

“I tell (my fans) ‘let’s not be tribal, but let’s be Tribe-All because we are the Tribe-All generation,” he says.

Dydda, who grew up in the Mathare slum in Nairobi, was nearly a casualty of the violence that broke out after President Mwai Kibaki, a Kikuyu, was declared the winner of the 2007 election and the prime minister Raila Odinga, a Luo, cried foul.

“Things were crazy â€¦ I saw the ugly of the ugly,” Dydda said. A gang from his tribe, armed with a panga (machete), stopped him in Mathare and demanded he speak their language to prove that he was one of them. But Dydda only spoke Sheng, the mixture of Swahili and English, which is the language of the ghettos.

Luckily, an older man appeared and told the gang that Dydda was one of them. “It was a wake-up call,” Dydda said.

The rapper, known for his stammer-and-stagger style, now preaches tolerance at his concerts and hosts a conversation under the hashtag #Ghetto_Parliament on Twitter. “(I changed my name) because I wanted to belong to the country Kenya and not a specific tribe,” he said.

Four Kenyans, including presidential candidate Uhuru Kenyatta, are facing trial at the international criminal court for their alleged role in the poll violence. About 1,200 people were killed and hundreds of thousands were displaced.

Many young Kenyans, from graffiti artists, to singers and civil society activists, say they are tired of a political system built on tribal loyalties and endemic corruption. But already, analysts says, some politicians are using the divisive rhetoric of “us against them” on the campaign trail.

“[Political] mobilisation is still â€¦ being done around individuals and these individuals are talking to their ethnic base first,” said Ndung’u Wainaina, executive director of the International Centre for Policy and Conflict.

In July Kenya’s National Cohesion and Integration Commission, brought a case against three Kikuyu musicians, charging them with inciting violence against people of the Luo tribe in political songs. The singers denied the charges.

Joy Mdivo, the head of a Christian NGO, the East African Centre for Law and Justice, believes Kenyans do not want to fight again but the tensions are still there. “We are a new generation. Yes, your tribe is important to you because that is your heritage â€¦ but it doesn’t define you,” she said.

While calls for change resonate in Nairobi, it is hard to gauge the hunger for a new political dynamic outside the cosmopolitan capital.

Wainaina said rural communities would support change if they thought it would improve their access to jobs, services and political representation, but warned that the ethnically based divisions were easily manipulated.

“Issues of resource allocation and accessibility, representation, accountability and participation are at the heart of these communities but (the lack of) an enabling environment, including access to critical information, remains a major hindrance,” he added.