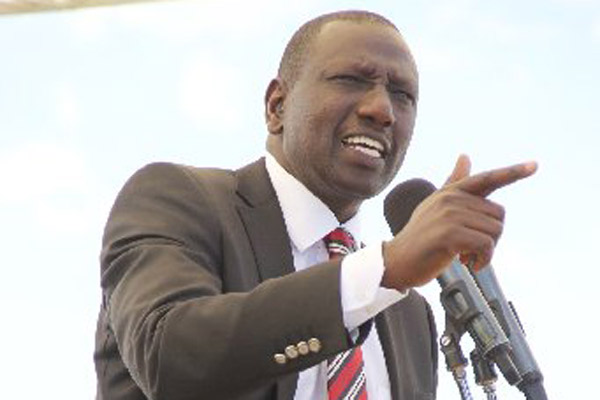 Deputy President has shocked the republic by publicly declaring that he and president Uhuru want Moses Kuria to win the Gatundu South by election so that he can continue his verbal attacks on Raila Odinga and other imaginary enemies of Jubilee coalition.

A joke is told of many men from a certain community who blame Raila Odinga for everything including; their lack of fire power/erection, sons molesting domestic animals (cows, chicken, donkey, goats), sons and daughters failing national exams (like scoring 243/500), criminal cases, killer brew or even when they hire gangs, tribesmen defiling daughters and impregnating them….and many more

It is a dirty world out there, at least we have Raila to blame even for Alshabaab attacks. Experts are now calling on Jubilee pay Raila for use of his name in successfully to blinding Kenyans on obvious failures of the regime.

Here is what blogger Robert Alai posted on Ruto’s campaign tour to Gatundu:

I am surprised that Deputy President William Ruto went to Gatundu to campaign for Moses Kuria. First, Moses Kuria has called for the massacre of Luos and Muslims in his posts.

Is Ruto this idle???

Does William Ruto have only guts to campaign for people whose only accomplishment is calling for mass execution and termination of those he doesn’t agree with?

I have said before that I think Moses Kuria needs to be challenged in public about his utterances. But the DP publicly supporting him? Naaahhh!!!!

Even if the DP supported Kuria, his public pronouncement of support for his candidature raises questions about what he stands for. Seriously!!!!
Click play to watch the raw video: