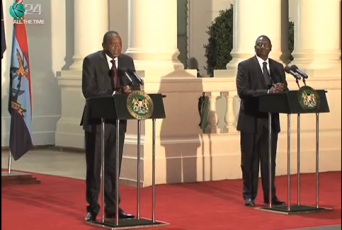 We can reliably confirm that the delay in announcing of the second “installment” of cabinet secretaries was caused by a disagreement between the two principles.

Whereas the powerful dark forces had lobbied to have Charity Ngilu, Musalia Mudavadi and Najib Balala included in the cabinet, Deputy President William was of the opinion that politicians should be left out completely.

The strong public support exhibited following yesterdayâ€™s announcement of the four cabinet nominees is what prompted Ruto’s change of attitude.

â€œThe deputy president is of the opinion that there are competent Kenyans who can drive public service to the next levelâ€ said our state house source who requested anonymity.

â€œIt is a known fact that since NDP joined KANU,Â  no opposition politician appointedÂ  appointed to the cabinet remains loyal to the end cabinet life, they work hard for first two to three years and by end of 3rd year they start to rebel, we cannot afford political bickering in service delivery to our peopleâ€ Hon Ruto is reported to have told Uhuruâ€™s kitchen cabinet.

â€œTNA , URP and UDF will receive millions of cash from the treasury, these politicians should help us build our political partiesâ€ a close ally of Ruto told this reporter.

â€œWe shall consider our friends for nomination to boards of public bodies where they shall have non executive powers to give them a window for political circulation but those with good academic and public service the likes of Hon Poghsio will be appointed envoys to powerful countries like China, USA, UK, Australia, France, Netherlands et el â€ Â Ruto is said to have promised.

Rutoâ€™s strong presentation caught the dark forces by surprises and in the ensured negotiations it was agreed that they will finalize the talks after dismissing the press teams that had camped at statehouse for hours.

At the press briefing, Ruto in a move to pre empty the dark forces affirmed that no politicians shall be named to the cabinet, effectivelyÂ  shutting the iron door for Jubilee coalition partners Charity Ngilu, Najib Balala and Musalia Mudavadi.

Ruto told reporters on live TV (by extension the millions of the Kenyan public) that the cabinet will be made of technocrats, many of whom have been sourced from the private sector and academic institutions.

So far, Ruto and Kenyatta have named four cabinet secretaries of the 18 portfolios.

Meanwhile Bett Murungi and Prof Oliver Mugenda are expected to be named into the cabinet. Prof Mugenda played a crucial role in the Kibaki 2007 re election campaign by providing the Kenya University facilities for strategy meetings.

In March 2013 election materials believed to have been used in rigging the election were found at Kenyatta University. The students who were involved in violence that ensured have since been summoned to appear before the university disciplinary committee.

We will keep an eye if the president and his deputy will be able to name the remaining 14 nominees to the cabinet.