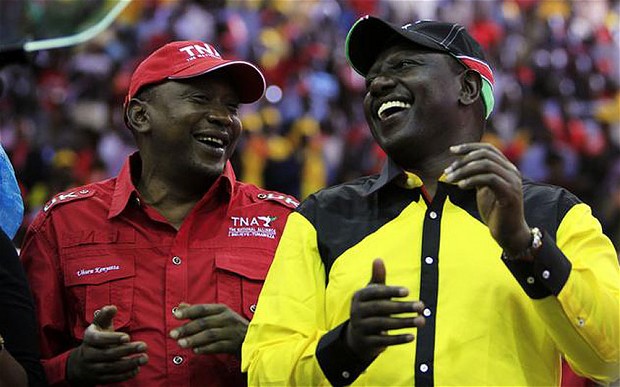 By Jacob Ngetich and Kipchumba Some for Sunday Standard

Details of how President Uhuru Kenyatta won over his deputy William Ruto against former Prime Minister Raila Odinga in the run-up to the March 4 elections can now be revealed. Interviews with multiple sources within TNA and URP reveal the intrigues, the fears, the schemes and sheer organisation, leading to the steady rise of the Uhuru-Ruto camp despite the huge odds against the Ã¢Â€Â˜ticketÃ¢Â€Â™.

First, Uhuru had to convince Ruto to play second fiddle at a time when their two communities were seen too hostile to each to forge an alliance. The decision to back Kenyatta was made by some 13 MPs from the Kalenjin community after a nightlong meeting at RutoÃ¢Â€Â™s home in Karen, Nairobi, on October 12 last year.

Ruto had invited the MPs to deliberate their options as the presidential race entered the final stretch.Ã‚Â  On the table were three options: Back Raila, back Kenyatta or Ruto goes into the elections alone.

Bomet Governor Isaack Ruto supported former Vice-President Kalonzo Musyoka, but in the estimation of his colleagues, the VP did not have a strong support base to mount a serious presidential campaign.

Sources said Kigen was even shouted down for his fervent support for Raila. The option of Ruto going it alone was also dismissed on the grounds that it would be expensive and at best, he would finish a distant third behind Kenyatta and Odinga in that order.Ã‚Â  Ã¢Â€ÂœThey implored their colleagues that it would be hard to sell the man they had spent four years calling names and that would call to question their moral fibre as leaders of the community,Ã¢Â€Â said the MP.

It was left to the trio to make the case for why they ought to support Kenyatta, another hard sell, given the bad blood between the Kikuyu and Kalenjin communities since the 2007 post-election violence.

The heated meeting nearly turned physical at some point when Kutuny and Konoin MP Julius Kones could not agree on the merits of backing Mr Kenyatta.

Some six kilometres away in the leafy suburbs of Lavington at an office run by Uhuru, a close ally of the man who would become KenyaÃ¢Â€Â™s fourth president was pacing up and down, anxious of the Karen meeting outcome. This was former Kikuyu MP Lewis Nguyai, who had been detailed to keep tabs with the meeting and update Uhuru.

In the wee hours of the morning, Uhuru proponents eventually carried the night. Ruto was mandated to start serious talks with Kenyatta to form an alliance.Ã‚Â  Nguyai relayed the meetingÃ¢Â€Â™s resolution to Uhuru. Ã¢Â€ÂœHe was a little bit surprised by that development,Ã¢Â€Â said another close ally of President Kenyatta. The next day, accompanied by Kuttuny, Chirau Mwakwere and now Senate Speaker Ekwee Ethuro, Ruto met Kenyatta at his offices in Lavington where he personally informed him of the Kalenjin MPsÃ¢Â€Â™ decision.

Two days later, they met again in Lavington where Ruto spelt out his demands. One of them was that they would share the Government on a 50-50 basis. Consequently, a team made of four from both sides, was formed to craft the coalition agreement.

Members of the committee from KenyattaÃ¢Â€Â™s side were Nominated MP Amina Abdalla, Kiambu Governor William Kabogo and Taveta MP Naomi Shaban. And thus the Jubilee Alliance was born to face off with RailaÃ¢Â€Â™s Cord Alliance.

At the meeting, Ruto asked for a month to sell the alliance to the Kalenjin community, which had expressed reservations about supporting Kenyatta. Kuttuny and Keter were mandated to prepare the community for the alliance through radio and other avenues.

As the year drew to an end, Ruto and Kenyatta met to share Cabinet positions, where it is said the latter came out feeling outwitted by the former.Ã‚Â  Ã¢Â€ÂœUhuru came with a list of the Cabinet positions he wanted. But Ruto outwitted him by proposing they share the positions one by one. Uhuru would pick one post and then Ruto would pick the next until the positions were exhausted. ThatÃ¢Â€Â™s how RutoÃ¢Â€Â™s side came out with strong ministries,Ã¢Â€Â said an MP privy to the meeting.

Something interesting happened on November 9. Ruto secretly met Raila at the home of an aide of former President MoiÃ¢Â€Â™s. The two leaders agreed to form a coalition government and Ruto toyed with the idea but for fear of backlash from his allies and the Kalenjin community, they agreed to keep it under wraps until December 4, 2012.

However, the idea withered soon on a fiery backlash from close allies of Mr Ruto, some who threatened to abandon him. In November, Raila, Kalonzo and Bungoma Senator Moses Wetangula unveiled their alliance at the Kenyatta International Conference Centre. The sheer number of people at the KICC seemed to have shocked the Uhuru, Ruto team.

An ally of the President and his deputy said when they saw the number of Cord supporters at KICC they panicked. Intelligence officials told them they would lose the elections unless they backed someone else because of their cases at the International Criminal Court.

Meanwhile, multiple sources have confided in us that the re-alignment for the presidential race began in earnest in mid-2012 and the date that both Uhuru and Ruto core teams were looking at was April 11, when the ICC trials were originally scheduled to commence.

Both were facing charges for crimes against humanity, and their communities were starting to coalesce around them. Their combination of votes could potentially be the winning ticket if rallied well.

Despite the ICC tag hanging over them, Uhuru and Ruto were now seriously considering running, the issue was who would be the torchbearer?

According to a source, Ruto was prevailed upon to abandon his presidential ambitions and take the running mate position behind Uhuru.

Ã¢Â€ÂœThe argument was simple, first it was easier to sell Uhuru in Rift Valley since he had run in 2002 on a Kanu ticket and been embraced by the Kalenjins. Secondly, they believed Kalenjins would be on the winning side in the first round with Uhuru on top of the ticket as opposed to Ruto having to convince them as a presidential candidate to vote for him again in the second round in the event that there was a run off between Ruto and Uhuru,Ã¢Â€Â the source told The Standard on Sunday.

Another dimension was how to sell the two ICC indictees and convince voters they could govern the country while attending hearings many miles away. Simple, you rope in a third alternate candidate into the coalition. Ã¢Â€ÂœWe zeroed in on Eugene Wamalwa,Ã¢Â€Â the source revealed.

He added: Ã¢Â€ÂœWe were convinced Western would not vote solidly for Mudavadi and Raila would eat into the votes. If we could get a Bukusu onto the coalition, it would give Jubilee a share of the rich Western vote, alongside Central and Rift Valley.Ã¢Â€Â

The strategy to sell the coalition to Wamalwa was simple; he would be guaranteed the SpeakerÃ¢Â€Â™s post, in effect as the third in line to the Presidency. When both the President and his deputy are out of the country, the Constitution gives the Speaker executive authority. Ã¢Â€ÂœWith the Hague cases calling and the possibility that both Uhuru and Ruto would be away for an extended period of time attending the trials, Wamalwa would be in charge.Ã¢Â€Â

Jubilee watched Wamalwa dilly-dally with the proposal, flickering on and off like a light bulb dancing to the tune of a diesel generator. The next thing they heard he was with pambazuka and then Amani coalition. They gave up on Western and decided to focus their energies and resources elsewhere.

They pursued another front, the Akamba vote. Kalonzo had been hanging around the G7 alliance believing he was the best option to take on Raila. Uhuru and Ruto insiders in the alliance confided to The Standard On Sunday that they were dealing with the predicament of KalonzoÃ¢Â€Â™s firm stand: Ã¢Â€ÂœKalonzo had made it clear he would not settle for anything less than being number one on the ticket. Being number two was out of the question.Ã¢Â€Â

Towards the end of October, the source said Kalonzo was on a trip from Israel heading to London. Ruto called Kalonzo and told him the number one and two slots on the ticket had been taken.

Effectively, Ruto told Kalonzo he could choose another position from Majority Leader to Cabinet Secretary if he wished to remain with the group. Kalonzo hit the roof. It was clear he would not come along with them and they needed to urgently rope in Charity Ngilu. Kalonzo later joined hands with Raila to form the Cord coalition.