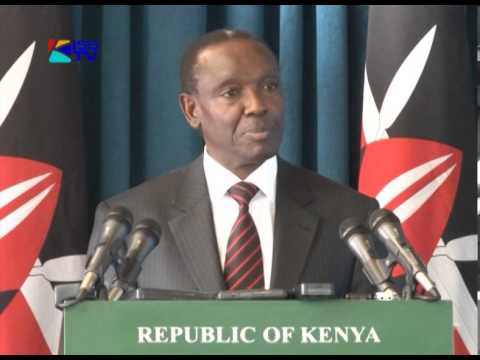 It happened! Oh God it happened! Canâ€™t believe it! But am charmed, very charmed! I hope my friends will tell Esipisu I remarked: Hurray! You see, during his heyday after having been dusted from the shelves of Jogoo House offices by â€˜himâ€™ of the mavi ya kuku fame, Muthui achieved three things: One: Laila, two: Amoro, three: Ondiga. In protest writing, the junction where journalism meets political activism through the pen, a lot can be said of Muthui Kariuki, the disgraced former government spokesman sacked and redeployed (to save face) by mandarins at PSCT in what they termed as â€˜a move to ensure coherence, clarity and consistencyâ€™ in government communications.

Coherence.Clarity. Consistency. No insult can be more aggravating than a communication expert being accused of massive incoherence, injurious ambiguity, and ridiculous inconsistency! If I were Muthui, the best I could have done is to pack my belongings, go leave them with my wife and register for another four year marathon in communications and public relations at Moi University, or any of the media studies programmes offered next door at the University of Nairobi; or better still, purchase any book by Marshall McLuhan, holy father of communication as practiced contemporarily, and read it cover to cover; word by word, paragraph after paragraph, comma by comma until I get it!

Coherence.Clarity. Consistency. Three holly words. Three basic fundamentals of communication. Where did he lose it? This is a dirge after the demise of one of the most incoherent public communicators ever employed after the invention of sophism. It is meant to provoke a senior to feel the pain of vague communication which led to the death of one of the most significant institutions which ensured the survival of President Mwai Kibakiâ€™s second presidecy. No one influnced my generation of communication students as the immediate former occupier of the disfigured office that the Kenyatta government has wholesomely â€œshut downâ€.

In the second presidency of Mwai Kibaki; the name Alfred Mutua sent shockwaves down the spines of even hardened diehards (forgive my oxymoron) of then ODM side of the Grand Coalition government. Not that Mutua was the best communicator. Not that the man who currently manages Machakos County was a genius. But, unlike Muthui, Mutua understood not just his role as the guy to â€˜spinâ€™ for the government; he also understood his place in that role; and the circumfurence of the communication circle he had to operate within. When he spoke, instead of the government getting â€˜embarrasedâ€™, it always had the last laugh.

Mutua made the office of the government spokesperson so close to that of the Head of the Civil service, and by extension the presidency that whenever he spoke, it was indeed the â€˜government positionâ€™, and you were sure to tell by the actions which would follow. It was this clarity and precision in government communication that a man who was, by fate, an outsider, became a key insider of that government- you only need to reread the number of unsavoury mentions in Migunaâ€™s peeling back the mask to know the extent of â€˜delegated authorityâ€™ Alfie enjoyed. Because he lived; Mutua made the office of the chief government communicator an institution. People hated and loved the office in equal measure. No one, not even this quarellsome young kenyan had an issue with the person of Alfred Mutua.

People make institutions; thatâ€™s what I got from Alfred Mutua, and history has proven him right. Enter Muthui. Now, friends have wondered: with this new pungent distinction of being the first of a cohort of the last of Kibakiâ€™s â€œgood ethnic deedsâ€ to central Kenyans to be openly fired, or to use that politically correct term â€œredeployedâ€, just where is he headed now? If Statehouse fired him because of manifest incoherence and vexatious ambiguity then effectively (but no surety) he becomes the best undertaker for jobs that need no second thoughts; no hard thinking. Where are these jobs found? Muthui was a virus in the political bluetooth of Jomo II. He took on people hardened by political adversities.

In one of his most primitive acts, he cantakerously took on Raila Odinga, a whole political institution, and attempted to put him between sirens, VIP lounges, and GK vehicles. Just how he thought he could win against a decorated political marine often baffled me; but he seemed to enjoy being irrelevant, now he is yet to be assigned â€˜within the governmentâ€™: as the Luo often say â€œsirkal iye lachâ€ (no need of translation); he is lucky he is a kamwana! He sounded illogical because he seemed illogical. Personal image, in this trade of the jibes, is key. Was it not James Whitecomb Riley who told us about it? â€œIf it looks like a duck, swims like a duck, and quacks like a duck, then it probably is a duckâ€, only that in our case, we are certain to say the duck talks! Lessons? If there is one thing we who are rising in communication circles have learnt from the demise of an incoriggble senior peer; let it be this: coherence, clarity, and consistency pays! Oh my God! He is fired!

Fare thee well bro. . .as for the great discipline of communication: Aluta continua!