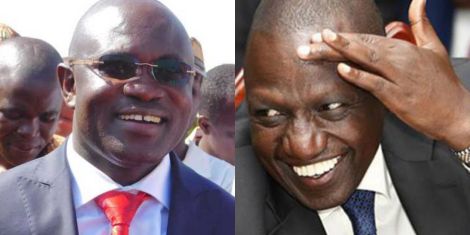 Kenyans on Twitter made #AsanteRuto the top trend o Saturday morning “congratulating the deputy president for winning the Ugenya by-election.”

The deputy president did not expressly support to any of the two candidates, but ODM party in its campaigns kept pushing the narrative that their opponents were Dr Ruto’s projects.

The narrative has now birthed the #AsanteRuto trend as users congratulated the DP.

Well in reminder of the times MP David Ochieng used to sing and praise Raila at all costs,we have been cautioned that ‘asante Ruto’ will die as well like the political trend in Kenya.

In 2017 Mr Ochieng insisted that MDG is part of the National Super Alliance (Nasa).

He had to convince the voters even further, more so after Nasa presidential candidate Mr Raila Odinga insisted that Nasa has only five affiliated parties.

“It is wrong for some local politicians to keep on spreading rumors against me claiming that I am a Jubilee mole, I am a strong supporter of Nasa and I fully support the endorsement of Raila Odinga for president,” Mr Ochieng said.

Today the narrative changed and he is more than grateful for riding on Raila’s rival William Ruto in his new seat win .

During his thanksgiving remarks, Ochieng’ revealed that  Ruto supported his campaign which saw him trounce Karan by 4000 votes. Ochieng garnered 18,730 votes against Karan’s 14,507.